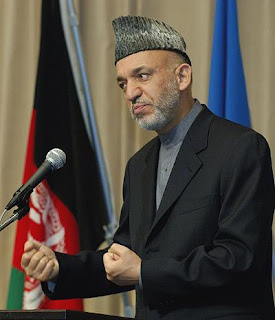 Five more of our soldiers have come home in coffins, five more in this pointless war, five more on the eve of armistice day.

I come from a family with a long military tradition. I grew up with the belief that it was wrong to voice any criticism when one’s nation was at war, because such criticism, justified or not, would inevitably be bad for morale, bad for the morale of our service people, who need every sign of support from home in the difficult tasks they are so often faced with. I was always deeply hostile to the war in Iraq because I saw the invasion of 2003 as a dangerous adventure, one that simply had not been thought through, one based on lies and dissimulation, though my criticisms were always political and historical in nature and direction.

I thought Afghanistan was different; I thought this was a war we had to fight, for all sorts of strategic reasons; I’ve argued this very point on other blogs. Not any more; my contributions on this subject have been growing increasingly hostile. Our troops are there to uphold the worthless Karzai government, to prop up a man recently ‘elected’ by ‘acclamation’. This is a fraud, no matter if he was congratulated by Brown and Obama on his ‘victory’; one would have to be blind not to recognise this process for what it is. Who, in the quietness of reflection, wants this murderous carnival to continue, to see more and more bodies return in a chain without end?

Those who read Christina Lamb’s article in The Spectator the week before will have noted that the various European powers-whose contributions have been largely worthless, anyway-are looking for an early exit. The Canadians intend to go by 2011. In the end perhaps only Britain and the United States will be left.

General McChrystal wants another 40,000 troops, and he may now get them, since Obama has deluded himself that the ends of democracy have been served. Reinforcement on that scale will take the total NATO strength to about the same levels as the Soviets at their peak. No matter. Double that number again and I am still convinced that ‘success’, however defined, will still be just beyond reach; the faster one runs, the faster it retreats. We would simply have the usual situation in guerrilla warfare, demonstrated time and again, from the Peninsular War to Indochina: heavily armed foreign troops isolated in cities and garrisons, islands in a sea of hostility.

Success; think about that very point, think about what it means, exactly what it means. When our soldiers took the district of Nad Ali last year, suffering casualties in the process, they promptly handed control over to the Afghan police. These same police at once set about raping local boys, a situation so bad that the people asked the Taliban to come back and protect them. Corruption at the periphery, corruption at the centre; this is the reality of ‘democratic’ Afghanistan, a country where even Ahmed Wali Karzai, the President’s brother, receives subsidies from the CIA, despite his involvement in the opium trade.

Let Karzai sink; let our soldiers come home. We must look to our immediate defences; it’s as simple as that. 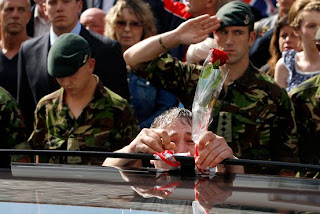 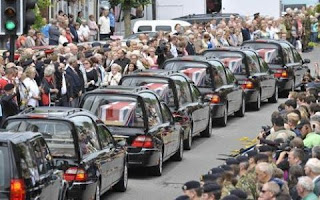