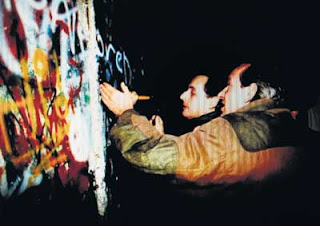 It was the practice in the days of the old Soviet Union, in the time of Stalin, to airbrush inconvenient people out of history; to remove all positive references to them from published texts and to remove their image from photographs, a sort of modern version of a process of 'cleansing' that the Romans referred to as Damnatio memoriae-the damnation of memory. Now there is a reverse process at work, a writing of oneself into history and its ben invented by Super Sarkozy, France's absurdly vain little president, Photo-Opportunity Man in person.

This week Europe celebrated the fall of the Berlin Wall, without doubt the great defining moment of post-war history. Bliss was it that dawn to be alive but to be there was very heaven. So, Sarko was there, Sarko had to be there on that night of nights, 9 November, 1989. He is so excited by his pivotal part in history that he even published a piccie of himself on Facebook, rushing at the said Wall with a pickaxe, almost as if he single-handedly responsible for releasing the huddled masses yearning to breathe free.

Seemingly, so the history goes according to Sarko, still only an MP at the time, he left Paris on the morning of 9 November in the company of Alain Juppé, the former prime minister, after hearing of "major developments in Berlin." He continues his illuminating story by saying that after they arrived in West Berlin they went strait to the Brandenburg Gate, "where a noisy crowd had gathered expecting the announcement the wall would come down."

Oops, not quite, dear Mouse. News of the immanent collapse of the Wall did not come until late on the evening of 9 November, so you could not have heard of this in Paris that morning, could you now? You and your pick-axe would have been there on your own because the actual hacking did not begin until the following day. But, honestly, if you have to tell a lie try to make sure that all of the angles are covered. Monsieur Juppé has said that he himself was in Berlin about a week after the great event. Investigation of the French press archives show that the two gallant Frenchmen did not in fact arrive in Berlin until 16 November. Did they come with pick-axes, I wonder?

Ah, Monsieur le Président, Stalin could have helped you in this rewriting of history, referring you, I feel sure, to the tactics employed by the NKVD. Is there a French version of this notorious security apparatus? No? Well, maybe you should stop trying to pretend that you are a bigger man than you are. Maybe you should be a little more precise and a little less vain. :-))
Posted by Anastasia F-B at 17:16