Theirs not to Reason Why-the Charge of the Light Brigade 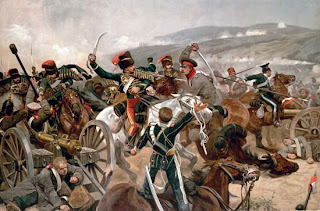 But, you see, theirs was to reason why, and there is, indeed, another possible perspective on the famous charge, which tends to be completely overlooked: namely, that of the troopers themselves. It was not a question of blind obedience to an impossible order. Lord Cardigan, commanding the Light Brigade, could very well have refused to obey for the simple reason that senior officers were expected to exercise wide discretion in interpreting orders that might have been based on out-of-date information. However, both Cardigan and Lord Lucan, his superior officer, were aware of serious discontent among the ranks, which could very well have had a direct bearing on their conduct that day.

There were two things uppermost in the troopers mind on the day of the Battle of Balaclava: cholera and Cossacks. Since September cholera had been cutting its way through the ranks, to such an extent that disease had become the main enemy, not the Russians. According to one officer:

...the men and officers are getting daily more disgusted with their fate. They do nothing but bury their comrades. They say loudly that they have not been brought out to fight, but to waste away and die in this country of cholera and fever.

Those who died of disease could not, of course, expect any pensions to be paid to their dependants. The war, moreover, was beginning to settle down to one of siege and entrenchment, with little prospect for further cavalry action. In the end, far more men of the Light Brigade were to die of disease than in the Charge.

Unlike the men of the Heavy Brigade, the Light Brigade had seen no action. As a result they had been insulted both by the enemy Cossacks, and their own infantry, accused of being afraid of the Russian cavalry. One the day of the charge itself the Brigade had been close to mutiny because they had been ordered to hold back while the Cossacks killed Turkish soldiers attempting to surrender. It was the same Cossack units that had taken shelter behind the guns that Lord Raglan, the army commander, had ordered them to attack.

What is remarkable about that day is the number of men who disobediently joined the ranks after Lucan approved the order to attack, including one who was flogged for this afterwards. Also, if it was a question of merely obeying orders the men would have ridden at the regulation pace, but they did not; they rode too fast, and Cardigan was even placed in danger of being ridden down as he tried to slow the pace. One man in the 13th Light Dragoons even shouted to a comrade "Come on; don't let those bastards [the 17th Lancers] get ahead of us." Some 500 of the Brigade galloped through the guns right into the Cossacks, who fled in panic, even shooting through their own ranks in their attempt to get to the rear. The whole of the Russian cavalry, 2000 strong, broke and fled. Raglans’ order had been to hold some guns, effectively disobeyed by the Light Brigade in their eagerness to close with the Russians. It was magnificent; and it was war. Honour the Light Brigade/Noble six hundred!