My Kingdom for a Gun: Finding Bosworth Field 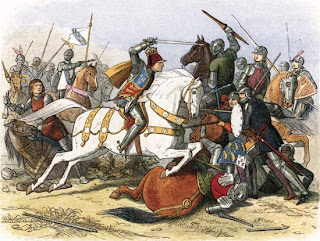 Battlefields are notoriously difficult to pinpoint for the simple reason that the action often took place over a widely scattered area and because of subsequent agricultural development. Bosworth Field in Leicestershire, arguably the most famous battle in English history, the dusk of the Plantagenets and the dawn of the Tudors, has presented particular difficulties. In the 1970s the County Council officially designated the site to be in the vicinity of Market Bosworth, building the heritage centre on Ambion Hill, where Richard III charged into death and immortality, following a report by David Williams, a historian. But it now seems that it’s all wrong, that the wandering battlefield may at last have found a permanent and true home some two miles to the south-west of the present site.

After a three-year archaeological investigation headed by Glenn Foard on behalf of the Battlefields Trust, significant battle debris has been found in an area to the north-east of Stoke Golding, though the exact location is still being kept secret. The finds include some obvious things, the kind of things one would expect, like the remains of swords and buckles, but there is also a higher than expected proportion of cannonballs and lead shot of various calibres from handguns.

The whole thing is still to be subject to peer review, but it looks quite promising. For me the particular point of interest is the suggestion that firepower played an important part in the conflict, distancing Bosworth from the other flashpoints of the Wars of the Roses, making it the first modern battle in English history.

The work of Foard’s team has been praised, amongst others, by Jon Humble of English Heritage, who said;

This is the second epic victory on Bosworth’s history-steeped soil. It has taken more than 500 years to reveal one of Leicestershire’s greatest and most elusive secrets, but this is a world-class example of what can be received through archaeological research.

Professor Richard Holmes of the Battlefields Trust added his own praise;

There is still much more to discover, but at last we have a site that goes beyond scholarly speculation and passionate local controversy. We can now see where those round-shot thudded into Leicestershire soil when Richard Plantagenet was still King of England and Henry Tudor was a mere pretender. We are given to using expressions like exciting and ground breaking too easily, but no historical discovery has elated me more than this one, and I have seldom felt more conscious of being able to touch the past

King Richard may not have found a horse but perhaps he has at last found a home.

I would like to add my own forlorn plea to this story: Bosworth was not, as so often said, the end of the Wars of the Roses. Conflict and subversion continued through a good part of the reign of Henry VII, from the Battle of Stoke to the rising of Perkin Warbeck. In a sense the dynastic dispute only really ended in 1509 with the accession of Henry VIII, whose blood combined the strains of Lancaster and York.
Posted by Anastasia F-B at 15:38