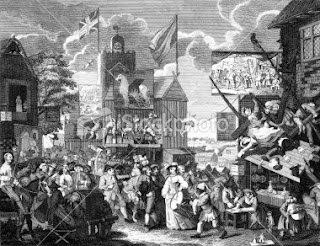 Imagine yourself, if you will, as a traveller coming to London in the early 1700s. The first thing you would notice is the almost constant pealing of church bells. They were rung not just to summon the faithful, but to alert the community to a hanging-a popular spectator sport-or to a death, when it would toll nine times for a man, six for a woman and three for a child, followed even more sombrely by one stroke for each year she or he had lived. The bell was also a prompt for the 'searchers', the old crones employed by the parish "to repair to the place where the dead corps lies, and by view of the same, and other enquiries, to examine by what disease or casualty the corps died." They were on the look-out chiefly for signs of the plague, and their instant 'diagnosis' would then appear in the London Bills of Mortality.

London by 1700, with half-a-million people, was the largest city in Europe, and with no sanitary arrangements whatsoever. Those approaching from the countryside were first alerted to its presence by smell before sight. Heaps of human sewage was deposited by 'night-soil' men by the roadside. Walking through the streets the traveller had to be constantly alert to the sudden emptying of chamber pots out or windows into the 'kennels', or open-drains running down the middle of the street. Jonathan Swift describes these delightful depositories being blocked with "Sweepings from Butchers Stalls, Dung, Guts, and Blood, Drown'd Puppies, stinking Sprats, all drench'd in Mud, Dead Cats, and Turnip-Tops." If this was not bad enough our lucky traveller would have to breathe in air thick with sulphurous smoke from domestic fires and industrial furnaces. Those living near graveyards would also have to endure the stink of decaying corpses, buried just below the surface.

Having survived the baptism of stink and smoke, the said traveller was highly likely to contract some fatal disease soon after arrival. Malaria was commonplace, as was typhoid from the contaminated water-supply. Contaminated food was a major cause of dysentery. Poor personal hygiene meant that most people, high and low, had fleas and lice, even to be found in the gentleman's periwig. Smallpox was also rife-so called to distinguish it from the great pox, or syphilis, which was all too common among certain sections of the community. Tuberculosis, also common, was the cause of endless spitting and retching, both indoors and out. One in three babies died before the age of two; and of those who survived, half were dead before the age of fifteen. A great many of these unfortunates simply died of ignorance, with mothers using dirty coins to sooth the pains of teething, and forcing babies to eat solids.

Our traveller would have to find some means of supporting herself or himself quickly, for life was hard and there was no allowance for failure. Suicide was common, and the details of the deaths were eagerly reported by the hack press of Grub Street-"Yesterday morning a woman near White-chappel, who workt to a throwster in those parts, and earned 8 shillings a week, hanged herself in her lodging; but nobody can guess at the reason of her despair." 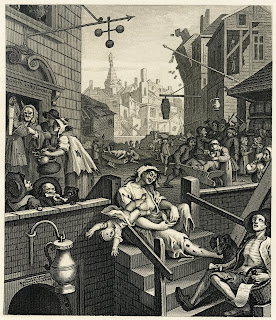