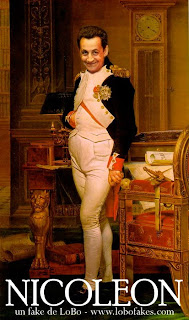 At the risk of appearing unfair the vamp is going to have another bite at Super Sarkozy, one of several. Yes, it might be just a tad excessive but I do assure you that I have no particular animus against the Midget, the European Union’s pocket Napoleon. But how can I resist drawing blood from his latest extravagance, his Euro shower, mentioned recently in The Daily Telegraph?

Do you know how much it costs to ensure the cleanliness of the President of France? No? Neither do I really, but what I do know is that while France held the rotating Euro presidency he had a shower installed for himself in the Grand Palace at a cost of £250,000 for the three-day summit held in Paris in July of last year. Yes, that’s right, only the said shower, complete with air-conditioning and radio ‘surround sound’, never witnessed the presidential torso: it was torn down unused days after completion. Sarko himself decided to perform his ablutions in the Élysée, ten minutes down the road. What a shower, yes, what a shower.

The general expenditure for this junket would have shamed Nero, but it’s rather the thing in the new Roman Empire. This three-day event alone cost the European taxpayer £16 million, including a dinner at a cost of £23,000 a head. What a feast that must have been! I expect the leftovers were scattered around the world like loaves and fishes, to places where people earn no more than a dollar a day, to places were people exist on the threshold of starvation.

The Midget may not be the brightest card in the European pack but he can spend as well as any. His six-month presidency of the EU cost a total of £160 million, among the most expensive in European history. Mark Wallace of the Tax Payer’s Alliance said: “It’s small wonder the EU is so wasteful if people who are meant to make it work for us are getting pampered in the lap of luxury.” Nigel Farange added: “The Napoleonic ambition of Brussels is underlined by the throwaway extravagance of its elite.”

Well, let’s just wait until that fright Tony Blair gets his hands on the goodies. What’s wrong with the Continentals? Why do they not hate this man, this warmonger and hypocrite, as much as I hate him? Can they not see him for what he is? Obviously not. Never mind; as David Milliband said, his cavalcade will stop the traffic; at huge expense, no doubt!

Finally, on the subject of El Presidente Blair, I rather enjoyed a letter from one Bob Wydell in the Telegraph;

Now that the Lisbon Treaty has been bulldozed through 26 countries and secured with bribery in another, Tony Blair is our only hope. He has ruined Britain, alienated the people of England, Scotland, Wales and Ireland against each other and subordinated the once great Britain to the fraud-ridden European Union. Our only hope is that he can do the same in Brussels-ruin it. 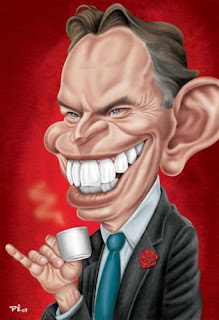