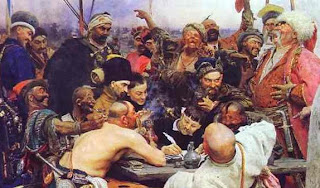 I suppose when people think of Cossacks they bring horsemen to mind, but the story of the sea-going variety is every bit as dramatic, and still remembered in Ukrainian foklore. Their story really begins after the Ottoman Turks gained control of the Crimean Khanate, and began to operate a trade in Ukrainian slaves out of the port of Kaffa. In 1553 Dmytro Vyshnevetsky organised several Cossack bands into a single host, centred on a fortified camp, known as a sich. This fortification was located on the lower Dnieper River close to a series of cataracts or za porohamy. Because of this the host took the name of the Zaporozhian Cossacks, and began raiding Turkish settlements along the shores of the Black Sea.

Their first recorded naval raid dates to 1538, with an attack on the fortress of Ochakov. This was followed by more frequent and better-organised raids elsewhere, the freeing of Christian slaves being one of the chief aims, as well as the acqusition of plunder. Their success was such that they attracted the attention of the western European powers, including the Papacy, who made diplomatic overtures in the hope of launching joint ventures against the Turks.

During the early decades of the seventeenth century the Zaporozhian naval war reached the height of its success. Using small, shallow-draft, and highly manoeuvrable galleys known as chaiky, they moved swiftly across the Black Sea. According to the Cossacks' own records, these vessels, carrying a 50 to 70 man crew, could reach the Anatolian coast of Asia Minor from the mouth of the Dnieper River in forty hours. The chaiky were often accompanied by larger galleys, that served as command and control centres. The raids also acquired a distinct political purpose after Petro Konashevych-Sahaidachny became hetman in 1613, intending to turn the host into the nucleus of a Ukrainian nation with the support of the European states.

By 1618 the Zaporozhians were members of the Anti-Turkish League, as Schaidachny transferred his seat of power to Kiev, nominally under Polish control, but functionally independent. The fighting qualities of the sea-going Cossacks was even admired in the Ottoman chronicles: "One can safely say that in the entire world one cannot find a people more careless for their lives or having less fear of death; persons versed in navigation assert that because of thir skill and boldness in naval battles these bands are more dangerous than any other enemy."

In 1615 the raiders even sailed to the walls of 'Tsarhorod', as they referred to the Turkish capital, plundering the ports of Mizevna and Archioca. An attempt by the Turks to blockade the mouth of the Dneiper, and thus deny the Cossacks access to the sea, was defeated in the spring of 1616, the raiders going on to capture Kaffa, which was burned down after all of the slaves were freed. That same year Trebizond, in eastern Anatolia, was captured and destroyed. Sultan Ahmed I sent his fleet to the Dneiper in pursuit; but instead of going home the Cossacks once more sailed to Istanbul, where they raided at leisure, even rampaging through the Topkapi Palace, according to one account. The city was raided four more times, once in 1620 and no fewer than three times in 1624.

After 1624 the Zaporozhian raids gradually died out, as the Cossacks began to devote more and more of their martial energies to land-based campaigns, fighting on one side and then the other during such conflicts as the Thirty Years War. But the legacy of the raiders remains an important part of the Ukrainian national consciousness. And if anyone wants a little fanciful insight into the spirit of these indomitable men, then I would suggest looking at Ilya Repin's marvellous painting Reply of the Zaporozhian Cossacks to Sultan Mehmed IV. 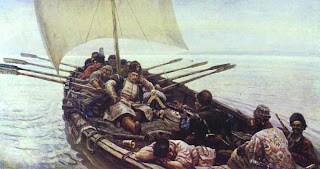