We all have our favourite childhood villains. Mine just happened to be the Borg, the cybernetic race from Star Trek, a race that expands and assimilates others in the pursuit of perfection; a race where no individuals exist just a collective or a hive mind. They both fascinated and terrified me; fascinated because their determination was so compelling, and terrified because I did not want to be ‘assimilated’, I did not want to lose my individuality.

In ever way they were different from the other alien encounters faced by the Star Trek crews. Races like the Klingons were frightening enough but familiar; after all, they were no more than Vikings in space. But the Borg, what possible basis of comparison existed for them, those half-humans, and half-machines? Even their ships, their cubes, were different from all others. I so admire the ingenuity and the imagination that saw the Borg emerge from virtually nothing, only to assume a definite shape and rationale subsequent to their first appearance in the television series.

My favourite Borg, of course, was Seven of Nine, played by Jerry Ryan in Star Trek Voyager, a Borg who managed to de-Borg, if I can put it like that, recovering something of her humanity among Captain Janeway and her crew. But what I liked about her particularly, what I identified with, was her cold, sharp intellect, her rational mind that never seemed to lose her old Borg associations completely. So, perhaps assimilation is not so bad after all.

Ana is the Borg. You will be assimilated. :-) 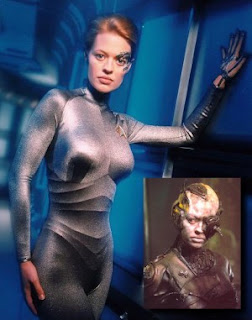 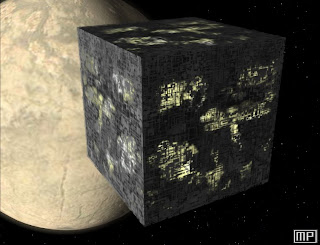