Being Nicer To Women-Change Comes to the Kingdom 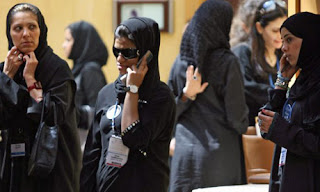 I have no great enthusiasm for the message of Freudian psychology, the contention that neurosis is reducible to forms of sexual sublimation and repression. I have no liking in particular for the social psychology of the likes of Wilhelm Reich. Still, there is something to be said for the argument that he advances in The Mass Psychology of Fascism, that certain forms of political enthusiasm, forms of fanaticism, are really misdirected libidinous impulses. George Orwell essentially says the same thing in Nineteen Eighty-Four. In his dystopia the Anti-Sex League is a symptom of the state’s suspicion of any activity that leads away from worship of itself.

I brought these examples to mind on reading a recent article on women in Saudi Arabia in Time magazine. The point is made that fifteen of the nineteen 9/11 hijackers came from Saudi Arabia, a country where a conservative version of Islam, high unemployment, limited democratic rights and an archaic attitude towards women helped feed a mood of unchecked radicalism among young men, people who accept the prospect of ‘martyrdom’ because this world, their world, is frustrating and unfulfilling. This is not the Anti-Sex League; this is the No Sex League, the No Women League.

Whether King Abdullah is mindful of this possibility or not is of no matter. What does matter is that Saudi society is changing, if by slow degrees. Women are beginning to make an appearance. Mixed gender workplaces are now more common, some with women in senior managerial positions. The government is expanding educational opportunities for women by building dedicated universities as well as encouraging more women to enter the workforce. Women have even been appointed to the Shura council, the advisory body appointed by the King.

There are other changes too, big and small, that show the Kingdom is at least trying to make some progress into the modern age. Norah al-Faiz, the Deputy Minister in charge of girls’ education, the fist woman ever to hold a cabinet-level post told Time that “Fifty-five years ago there was no education for girls. Fifty years ago people didn’t accept the idea of women working. Now everyone wants their girls and or wives to work or go through higher education. I don’t think these kinds of changes have happened in any country as quickly as here.”

It would be wrong to read too much into these signs, wrong to overestimate the rate of change in a country that remains deeply conservative, the home of the Wahhabi branch of Islam. But even in this sensitive area, the area of religious fundamentalism the government is taking action against the more obvious perversions. Extremist websites have been shut down and people calling for a jihad muzzled or arrested. The religious police, moreover, are no longer acting in such an overbearing fashion, even attempting to be more ‘people friendly’, if one can imagine such a thing. On TV and billboards a campaign has been launched urging men to be nicer to women.