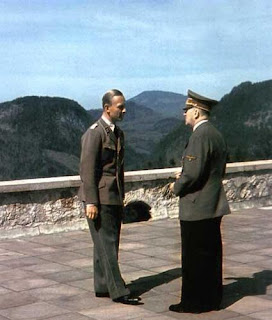 I was wryly amused by the story about Fritz Darges, the last surviving member of Hitler’s inner circle, who died recently aged ninety-six. As the last SS adjutant to the Führer he was present at all major conferences and social engagements, so hopefully his memoirs, which he instructed should be published after his death, may reveal some interesting secrets. Not that that is the source of my amusement.

Darges, who first met Hitler in 1934, described him in a press interview as ‘warm-hearted.’ He was to find out, to his personal cost, just how ‘warm-hearted’ he was. I can’t quite make up my mind if Darges possessed a sardonic wit-not a noted German quality-or a death wish, but he cracked a kind of joke at one the strategy conferences at the Wolf’s Lair, Hitler’s headquarters at Rastenburg in East Prussia.

It was July 1944, just two days before von Stauffenberg’s assassination attempt. A fly was buzzing around, landing on Hitler’s shoulder and then the map he was looking at. Annoyed, he told Darges to ‘dispatch the nuisance.’ His response was that since this as an ‘airborne pest’ the task should be delegated Nicolaus von Below, the Luftwaffe adjutant. Maybe he was just a stickler for protocol! Oh, but Hitler did not like this at all. In a temper he shouted “You’re for the eastern front.” And to the eastern front he went.

Still, he continued to love his boss, right to the end of his life.
Posted by Anastasia F-B at 15:52