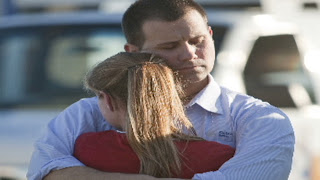 I’ve really avoided passing comment on the dreadful massacre at Fort Hood, on Hasan’s callousness and his treason, until the mist began to clear just a little. There are still more questions than answers but one or two things are falling into place Hasan himself seems to have been a ‘suitable case for treatment’: a loner, with no wife, no partner and no friends; a disaster waiting to happen

He was a loner, moreover, who visited extremist websites, seeking not for truth in faith but for some confirmation of his growing obsessions, his growing neurosis. Jihad and personal psychosis melded in this wretched and unhappy man. It encourages me, though, just as after 9/11, that Americans have remained calm in the face of this immense provocation; that most people have sufficient maturity and understanding to be able to divorce the faith from the fanatic.

The full story will have to wait for Hasan’s trail on a charge presumably of treason as well as murder. But there are immediate questions, questions about American security that really have to be addressed. Hasan’s opposition to the war on terror was known to former colleagues. He was known to be in contact with Anwar al-Awlaki, a radical cleric, who was once the imam at the mosque in Virginia where Hasan worshipped. These contacts continued after al-Awlaki left America in 2002, subsequently setting up a website in Yemen, preaching jihad against the west. The FBI discovered Hasan’s messages on this site last year but decided not to investigate further, saying that it could be explained away by the his ‘psychiatric research.’ His actions have subsequently been praised by al-Awlaki, so it’s reasonable to assume that some kind of client-patron relationship was in place.

What makes matters even worse is that Hasan extremist sympathies had previously been identified from blogs in which he praised suicide bombers. This was also investigated though dismissed. None of this information appeared on his background search when earlier this year he went to buy one of the weapons he used at Fort Hood.

A clear pattern was emerging, of aberrant, suspicious and eccentric behaviour. I really do not know why it was set aside in such a casual and cavalier fashion. I can only assume it’s because that nobody in the FBI and CIA or any other security agency expected an officer, an officer in the US Army, to behave in such an unpredictable manner, a manner that goes against every code of military honour. It’s through such sloppy thinking and mistaken assumptions that the enemy enters into one’s midst.
Posted by Anastasia F-B at 15:38