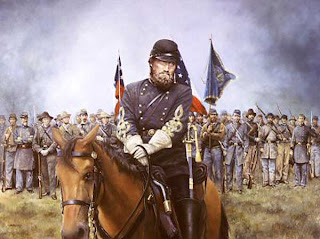 It would be almost impossible to understand the great Stonewall Jackson, either as a man or as a soldier, without some appreciation of his views on religion. In a letter of 1863, Daniel Harvey Hill, a fellow Confederate general officer, wrote of Jackson, "The striking characteristic of his mind was his profound reverence for divine and human authority. I never knew of any one whose reverence for Deity was so all pervasive, and who felt so completely his entire dependence upon God." Moses Hoge, a Presbyterian cleric, was even more direct, "To attempt to portray the life of Jackson while leaving out the religious element would be like undertaking to describe Switzerland without mentioning the Alps."

There are, I believe, strong parallels between the lives of Oliver Cromwell and Jackson. Both men shared the same Calvinist ethic; both underwent a kind of spiritual crisis; and both emerged with a single-minded determination that they were following a path prescribed by God. It was this conviction, as well as natural ability, that made them both such formidable soldiers. Jackson's search for commitment in faith took him through various church denominations in the period after the Mexican War in 1847, till he eventually alighted on Presbyterianism, with its stress on individual morality and personal salvation. Like all Calvinists he loved God with all of the fervour of his singular character, and hoped that God loved him in return. Belief in predestination was the natural corollary of this commitment. With the approach of the Civil War, he told a minister that dissolution of the Union, which he personally opposed, 'can come only with God's permission.' His first political loyalty, though, was to Virginia, the Old Dominion; and it was Virginia he followed in April 1861.

Once in arms faith and soldiering walked side by side. The great catastrophe that descended on the country was, in Jackson's view, a judgement from God. The Civil War was, therefore, in his mind, akin to a religious crusade to regain the favour of the Almighty. Christian faith and the Confederate cause were thus one and the same thing. In pursuit of this belief he was to become utterly ruthless in the field, driving his men as hard as he drove himself. After one of his victories he said to an aid 'He who does not see the hand of God in this is blind, sir, blind!' Confident of God's grace, he became a soldier of extraordinary brilliance, and the Valley Campaign of 1862 still counts as one of the supreme achievements in all of military history. Afterwards, in his official report, he wrote, 'God has been our shield, and to His name be all the glory.' After the Valley, the 'Army of the Living God', as he himself expressed it, marched east to drive the Union forces away from Richmond in the Seven Days Campaign, where he established his unique partnership with Robert E. Lee. Jackson's accidental death in 1863, after the great flanking march at the Battle of Chancellorsville was probably the most serious single blow ever suffered by the Confederacy.