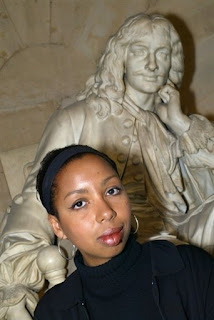 I continue to derive much simple impish amusement from the antics of the French president, such an endearingly silly little man, and French politicians in general. There has been so much recently to smile over: Frédéric Mitterrand, the self–professed sex tourist; the Prince Jean affair; the storm over The Princess of Cleves; the massive amounts of money wasted by the Midget when France held the revolving Euro presidency. Now Marie NDiaye, a novelist and winner of Prix Goncourt, France’s most prestigious literary prize, has been told she should not criticise Monsieur le Président. More than that; she was told that it was her duty not to criticise him.

And how she criticised! In an interview with Les Inrockuptibles, a leading cultural magazine, she said that she moved to Berlin in 2007 largely because of Sarkozy’s victory in the presidential election, finding the vulgar note he brought to French government and politics not quite the thing. To give up Paris for Berlin, of all places, is a sure sign of just how vulgar things have become in the Sarkozy Reich!

But this admission brought Eric Raoult, an MP and leading supporter of Le Dirigeant, to table a question to Frédéric Mitterrand, Culture minister as well as a sex tourist, asking whether “the duty of a person who defends the literary colours of France should not be to show a greater respect towards its institutions.” I see; Sarko is now an institution! He also demanded that prize winners should observe un devoir de reserve, the quality of reservation expected of servants of the state. Perhaps the same devoir de reserve, I wonder, expected in times past of the winners of the Stalin Prize?

In a style unique to the French, the literary proletariat have rallied to the side of their beleaguered colleague. Patrick Rambaud, himself a Goncourt laureate, said that Raoult is confusing the prize with Miss France, wrapped in her tricolour sash, though I personally would have gone with the archetypal figure of Marianne, just to give that little extra dignity. :-)

And Monsieur Mitterrand, what does he think? He thinks that writers, even winners of the Prix Goncourt, should be allowed to say what they like. Well he would, wouldn’t he, considering his taste for sex tourism was revealed in his autobiography. Alas, no award for the President, now generally considered a shallow philistine by many French writers and artists. Not good in a country where past leaders have always taken pride in their literary credentials. Perhaps he should let it be known that while he hates The Princess of Cleves he really loves The Da Vinci Code. :-))
Posted by Anastasia F-B at 16:29