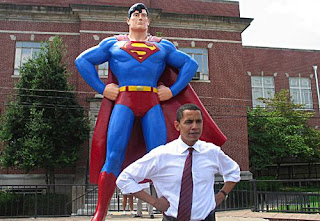 It's fairly clear now that Super Obama is turning into one of the weakest, least decisive president's in American history. His health care plans are creeping forward at best. He has an army in Afghanistan though he seems no longer to understand why it is there. His commander has asked for thousands of more troops but the President still dithers, fearful of his own Vietnam, fearful of being seen to support a goverment that is corrupt and fraudulent.

I was never fooled by Obama, not for a moment. Yes, I know he is personable, I know he is charming and charismatic. He has a beautiful speaking voice and the things he says, his words, often have a poetic, almost a messianic quality. And that is the heart of the problem, the messianic nature not just of his words but of Obama himself. He simply cannot understand the disassociation between his lofty visions and prosaic realities. The simple fact is when a politician tells you that 'all things are possible' he or she is either a fool or a liar. I do not take Obama for a liar.

Hilary Clinton, once Obama's rival, now his Secretary of State, touched on the real weakness behind the man during last year's presidential campaign, touched on what she called his Kumbaya message. I'm sure you know how that goes: all will be for the best in the best of all possible worlds if only we have the 'vision', if only we have the 'understanding', if only we follow Moses...or Obama. This is how she put it at a rally in Providence, Rhode Island;

I could just stand up here and say 'Let's just get everybody together, let's get unified. The sky will open, the light will come down, celestial choirs will be singing and everyone will know we should do the right thing and the world will be perfect.' Maybe I've just lived a little long, but I know how hard that is going to be.

And so it has proved. Obama raised expectations that he cannot meet. He deceived himself as much as the American electorate; he came as a messiah when he was only a politician. His words continue to grow as his achievements diminish. He went down well in Cairo and the Muslim world in general, but that has not brought Israeli-Palestinian conflict one step closer to a resolution. Similarly, as Tony Harden wrote in The Telegraph, his attempts to engage with Russia and Iran are getting virtually nowhere.

In a sense he is still on the campaign trail; but the world is not Wisconsin. His rhetoric is as polished as ever, and as empty as ever. Yes, he is still the glamour-boy, the class act with whom other leaders wish to have a photo opportunity; but I suspect that they laugh at him in cabinet offices and secretariats around the world, in places where people do not sit and sing Kumbaya. He is the nothing president, the nowhere man, making all his nowhere plans for nobody. I suppose he deserved his Nobel Peace Prize, a prize for nothing, awarded by those who do sing Kumbaya.
Posted by Anastasia F-B at 15:27