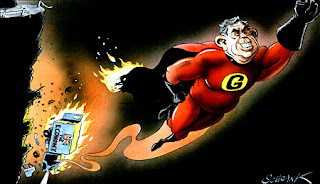 Of all the criticisms of the recent Queen’s Speech the most obvious appears to have been missed: the complete failure of imagination. In Gordon Brown’s position I would have been so much more creative. I would have promised, say, candyfloss and sunshine. Yes, everyday would be the first day of spring; every heart would have a new song to sing. It’s too ambitious, I can feel you think. Is it any more ambitious than that ridiculous note Her Majesty was obliged to deliver last week? It wasn’t a statement of intent. No; it was two odd things juxtaposed: a declaration of war and a declaration of incompetence.

Now, let me begin with the declaration of war. This Parliament, the Expenses Parliament, has only a few short months to live. It will have to be dissolved around Easter at the latest. So there is no time for the government’s legislative programme to be implemented, even if the opposition played clever dog. The whole thing is just so threadbare that one would have to be stupid to see it not as a realistic agenda but an attempt trip up David Cameron and the Tories, trip up their resistance to candyfloss and sunshine.

I don’t want to dwell on this dismal programme overmuch. Let me just take the case of free personal care for the elderly. Why, one has to ask, does this come at this late stage, after twelve dismal years of the Noo Labour Reich? Why? That’s easy: because such a measure was dismissed as too impractical and too expensive in the past. A second question immediately arises here. How does this commitment to additional expenditure dovetail with the laughably named Fiscal Responsibility Bill? The simple answer is that it doesn’t. This naturally leads me into the declaration of incompetence.

Here we have a government that after twelve years has discovered the need for fiscal responsibility. The corollary to this is, of course, that what went before was fiscal irresponsibility. Yes, I know that’s the truth but I never expected to hear such an open admission. The best comment on the proposal to legislate against the deficit came, I thought, from Corporal Clegg of the Liberal Democrats. It’s like passing a law promising to get up in the morning, he said. One does not need the guidance of law; one just does it.

Ah, but the real incompetence, the true measure of Brown’s utter stupidity, comes in the obvious thing omitted from the Queen’s Speech: the need to clean up Parliament; the need to act on the Kelly Report. On the one great issue that has dominated Brown’s ministry, the Expenses Scandal, the one issue that demanded to be addressed, he had not a word to say. Sir Christopher Kelly himself expressed his ‘disappointment’ at this decision to ignore the elephant in the room. This and similar criticisms have forced dismal Brown into another humiliating climb-down, something we should be used to by now. Harriet Harperson, in her capacity as Leader of the Commons, has said that the government will add new laws to deal with MPs allowances and pay. Really? On top of the existing agenda? Oh why, oh why, did you not just promise candyfloss and sunshine? :-))
Posted by Anastasia F-B at 16:37