The Woes of Lemonade Joe 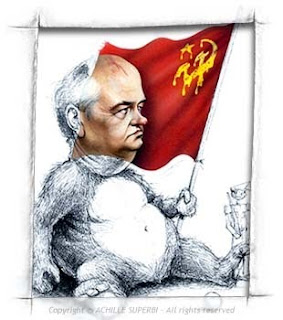 I think that it was Mikhail Gorbachev's tragedy that he truly believed that he could indeed reform the unreformable, to give fresh life to what was, in practice, a political and economic corpse. If you look closely at the history of the period you will see that he was acting on conclusions already reached by Yuri Andropov, his predecessor, who died before he could implement any policy changes. Alterations to the moribund system had to come, in one form or another. So, what went wrong? Well, let's have a look.

The first thing is that he was too ambitious: he opened so many doors that could not be closed again; to rooms within rooms, ever beyond. He began by looking for both political and economic change, whereas the wise thing would have been to renew the economy, the immediate area of concern, and leave political superstructures to a later date. He might, in other words, have adopted the kind of model being pursued with considerable success by the present Chinese administration. Attempting political and economic change at the same time was bad; it was far worse when one ran far ahead of the other.

In Gorbachev's case political reform proceeded well out of pace with the restructuring of the economy. To be more precise, the whole Soviet economy went into a state of freefall, while a growing sense of political freedom opened the whole apparatus of Communist rule to acute forms of criticism that Gorbachev could simply not control. It was a self-reinforcing process; the more living standards declined the more critical people became. For some the pace of change was too fast; for others it was not fast enough. There was no strategy; there was no road map; there was no coherence.

Gorbachev was also faced with the inertia and limitations of the whole system; an entrenched and sclerotic bureaucracy, and a population that over time had learned apathy as a mode of defence. The Secretary's attempt to appeal to 'the people' beyond the apparatus only increased hostility towards him within the Communist Party, just as his wider social and political initiatives often had risible consequences. I am thinking here of the anti-vodka campaign, intended to reduce absenteeism and increase productivity. All this did was to give an added spur to the black economy, and draped poor Gorby with the unfortunate appellation of 'Lemonade Joe.' Unpopular within the system, and unpopular without, he went on to attempt to ride all of the horses of the Soviet republics and the People's Democracies at the same time. Practically speaking, the whole thing was quite impossible.

Internal matters were made worse for Gorbachev by the falling world price of oil and gas, which reduced his room for manoeuvre still further. In international terms his initiatives looked increasingly desperate, particularly his moves towards disarmament, which further weakened the Soviet military-industrial complex, and only confirmed to western leaders that the U.S.S.R was in serious economic difficulties. The cuts in defence spending also failed to have the intended effect, with little in the way of realignment towards the consumer economy. Shortages remained a feature of the whole system, made worse when reduced subsidies led to a sharp rise in the rate of inflation. Many ordinary Russian people, particularly those on fixed incomes, were effectively priced out of the market altogether. And here the Roman historian Tacitus has some relevance: when it comes to a choice between freedom and security, between hunger and bread, there are few people who are satisfied to chew on abstractions.

Gorbachev certainly saw Communism as an ideal which could be renewed, in the same fashion that Christians throughout history have sought renewal in a return to the primitive faith. But Communism was-and is-The God that Failed. I think I should let the man himself have the final word;

When I became General Secretary, I admit that I was not free from the illusions of any predecessors. I thought we could unite freedom and democracy, and give socialism a second wind. But the totalitarian model had relied on dictatorship and violence, and I can see that this was not acceptable to the people... I wanted to change the Soviet Union, not destroy it. I started too late to reform the party, and waited too long to create a market economy.