I’ve alighted on another lovely snipet of information in my reading of Brian Levack’s The Witch-Hunt in Early Modern Europe, this time on the number of daemons who assisted Satan in his nefarious exploits.

The New Testament does not give a precise figure, simply saying that they were ‘legion.’ But that was not good enough for Medieval and late-Medieval theologians and thinkers; oh no, they required something altogether more precise! Sigmund Feyerabend, in one of his devil books, says that there were 26 billion. That’s fine; it’s just so clearly made up, probably the first figure that came into his head. But what about Alfonso de Spina? Writing in the fifteenth century he came up with a figure of 133,306,668. Wow; and 668; just how precise is it possible to get?! He must have counted them individually, poor man. :)) 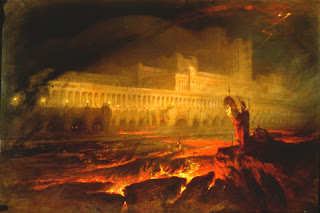