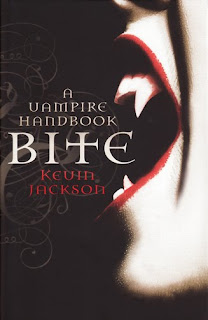 I love vampire lore and I’d like to recommend warmly Bite:a Vampire Handbook by Kevin Jackson, published by Portobello Books, a new contribution to the genre, but I can’t: it’s too rushed, too breathless. Though well enough written Bite carries a certain infelicity of style, due in part, one suspects, from a hurried publication to catch the Halloween market. There is far too much parenthesis and a number of annoying typos. Still, it did tell me some things, some aspects of vampire tradition that I did not know, and might serve as an introductory guide to those coming to the subject for the first time. But for those with some insight it is little better than an hors d'ouevres

Kevin Jackson, the author, grew up wanting to be a vampire (don’t we all!). Instead he became the next best thing-a film critic. :-) Bite combines both of these ambitions, as it spends as much time trawling through vampire movies, in a rather geekishly obsessive fashion, I have to say. I personally could have done with far less of this and far more of the lore.

The lore is good, that I am happy to admit. I did not know, for example, that German vampires are said to clutch one of their thumbs while in their coffins; that they can be killed not by wooden stakes but by the simple expedient of placing an apple in their mouths! Similarly I did not know that there was a vampire chair in Wales which was reputed to bite anyone who sat on it. Bulgarian vampires must be the easiest to recognise because-sans opera cloak-they had only one nostril and emitted sparks at night. Yes, I could have done with a lot more of this and a lot less comment on the ins and outs of Dracula movies.

Although Lord Byron and his friend John Polidori might be said to have given shape to the modern vampire myth it was Bram Stoker’s publication of Dracula in 1897 that marks the most significant step. Jackson is quite right that this novel is to vampires what The Origin of Species is to evolution. He misses one small but important, though, point in describing the book’s reception at the time.

The late nineteenth century saw growing concern in England over immigration, particularly from Eastern Europe, and particularly by Russian Jews. In 1904, Howard Vincent, the MP for Sheffield Central, wrote "While 260,000 people emigrated from the United Kingdom last year, their places were taken by no less than 82,000 of the scum of Europe." Arnold White, a leading eugenicist and racial theorist, considered most of the new arrivals in London to be 'diseased and destitute, a threat to British workers' While admitting that the Russian excesses had been 'regrettable', he said that this was based on a recognition by Russian statesmen that their country was threatened by a Jewish takeover. White was an influential figure, whose views of the Jews as diseased-ridden criminals, on the one hand, and exploitative international financiers, on the other, were widely disseminated. He included none other than Lord Salisbury, leader of the Conservative Party and three-time Prime Minister, among his correspondents.

It was Salisbury, while in opposition, who introduced a Bill in the House of Lords, calling for the expulsion of aliens, who 'threatened the peace and tranquillity of the realm.' Destitute aliens, like those coming to the East-End, were also to be kept out.

In 1900, during the Khaki election, the anti-immigration East London Observer noted "Surely for Londoners, the election should have one object and that above all party politics. I refer to the presence in their midst of these foreign Jews." The cause was taken up by William Evans-Gordon, soldier, author and Member of Parliament. He co-operated closely with the British Brothers League in having a Royal Commission on immigration set, to which he was appointed chairman. It was as a result of this agitation that the Aliens Act 1905 was finally passed, though, in the event, it was far less restrictive than Evans-Gordon and his supporters would have liked.

So, it was against this general background that Dracula made its appearance, carrying themes of pollution by blood and disease, carried to England from Eastern Europe, giving it a particular relevance for the debates of the day.

Anyway, if you want a 'bite' at this fascinating subject do by all means have a look at Bite. :-) 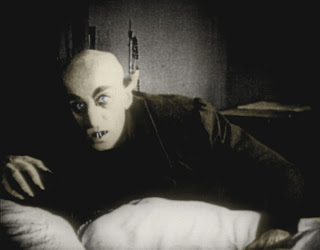