Cry for me, Argentina 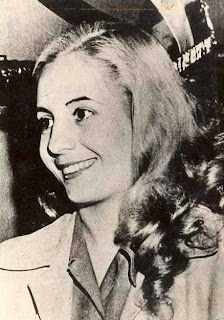 I saw Evita when I was about ten years old, the movie with Madonna in the title role, and fell in love with the character, with the glamour of the character; the politics came later.

Eva Duarte-Perón was a remarkable woman, so admirable in so many ways; a woman who pulled herself up from the most unpromising of circumstances to become a national icon in Argentina, important even today. I put some flowers at the Duarte family tomb in La Recoleta when I was in Buenos Aeries, a simple mark of respect followed by many others.

How could I possibly do such a thing? After all, she and her husband, Juan, were fascists, were they not? No, they were not. Fascism has become such a meaningless word, a simple insult thrown around without discrimination to label and damn anything and everything one happens to hate. So many people are seduced by shallow thinking and second-hand notions that, once lodged, are impossible to shift. I offer the following appraisal of the Peróns for those with eyes to see and ears to listen.

To begin, insofar as it is possible to define fascism at all, it existed as an alliance between radical middle-class elements and traditional power elites, usually in some kind of common front against organised labour. Is this true of Perón? Not in the least. His first presidency was constructed with the support of the Argentinean labour movement, not in opposition to it, in a common front against the traditional elite, known in Perónist parlance as the 'Oligarchy.' Bizarrely, Peron was a 'fascist' who was overthrown in 1955 by 'Catholic Fascists'. What kind of 'fascism', moreover, could unite radical left-wing and radical right -wing in opposition to military dictatorship as Perónism did after this coup?

I should make it clear that I do not deny that Perón took some of his political style from Mussolini's Italy, where he served for a time as a military attaché, but Peronism is a far more complex Latin American and Argentinean movement to be fitted comfortably within a European straightjacket. He was a Caudillo, a strong man, one of many across the Continent, with roots going back to the nineteenth century.

Evita herself had no interest whatsoever in ideology. Her politics were practical; she dealt with real issues and real people. She was loved by the ordinary people of Argentina because of the work she did through the Sociedad de Beneficencia, the so-called Eva Perón Foundation. It was also because of this love that she was hated; hated by the right and hated by the Marxist left.

In Perón and the Enigmas of Argentina, Robert Crassweller wrote;

Almost lost among the memories of Evita that have caught the imagination of the world there was another that has been little noted but whose importance is considerable: the legacy of incomprehension. Her brief and dazzling years were so successful because, in good part, she was so profoundly of the ethos. 'I have the body and the soul and the blood of the people.' But it was the ethos of the old, Hispanic-Creole tradition, born in the interior out of Lima and nurtured on the Pampas. Like Perón, she was wholly indigenous in origin, formation, and spirit; like him, she was distrusted and misunderstood in the Argentina of the Liberal System and in the outside world that knew only that Argentina.

Evita will always be among my heroines, marked less for her politics than for her simple humanity.

The choice was yours and no one else's

You can cry for a body in despair

Hang your head because she is no longer there

To shine, or dazzle, or betray.

How she lived, how she shined

But how soon the lights were gone.