The Queen of the Night 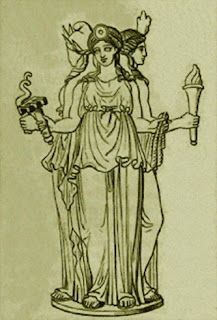 Hekate, whose name is shrieked at night at the crossroads of cities.
The Aeneid, 4: 609

When I was nine mother and father took me to see a performance of Mozart’s The Magic Flute at Covent Garden. It’s was a lovely production, with some super stage settings. At the time I could not make that much of the story, though of one thing I was certain: I loved the Queen of the Night just as much as I hated Sarastro, quite the opposite message from that Mozart was trying to convey. For me the Queen of the Night was elemental and beautiful, while Sarastro, for all his rationality, artificial and bombastic. I wanted the night and magic, not reason and sterility. What I wanted was Hecate, though that understanding came later.

Hecate, one of the oldest of the Greek deities, is the Spirit of the World and of Witchcraft. It was the poet Sappho who naed her the Queen of the Night. As the daughter of the Titans Perses and Asteria she is older than the Olympian gods themselves. According to the poet Hesiod her power dates, as he puts it, from the beginning. She survived Zeus’ purge of all of the other pre-Hellenic deities because he fell in love with her.

Worship of Hecate can be dated as far back as the eight century BC. The mythology associated with her clearly identifies her with witchcraft and magic. She also holds dominion over life death and regeneration. More than that, she is the great guardian on the frontiers between this life and the next, an intermediary between the living and the dead. She was the only deity to assist Demeter in her search for Persephone. When it was discovered that Persephone had to spend six months of the year in the underworld with Hades after accepting six pomegranate seeds from him, Hecate agrees to accompany her as a lady-in-waiting.

Hecate is most often depicted in a triple form, with three bodies, each facing in a different direction. One hand holds a knife, the tool of the midwife, another a torch to illuminate darkness, and the last a serpent, representing medical and magical wisdom. The goddess can also be depicted with a woman’s body surmounted by three animal heads-those of a dog, a horse and a lion.

Her sacred time is black night, when all rites associated with her are celebrated. Her sacred place is the crossroads, specifically three-way crossroads, giving her the name Hecate Trivia, meaning three ways. In ancient times her image was to be found most often in these intersections. Devotees of the goddess would rituals known as Hecate Suppers at a crossroads at the end of each month. As late as the eleventh century AD the church was still trying to eradicate Hecate Suppers.

It was the advance of Christianity that demonised Hecate. Her name became synonymous with witch, while the toad, the broom and the cauldron, her symbols, turned into witchcraft stereotypes. Symbols of fertility were reinterpreted, in other words, as symbols of evil. Her sacred dogs were turned into the Hounds of Hell. This degeneration helped disguise her original purpose as a deity of healing and protection.

It’s time to think again about the Queen of the Night. :-) 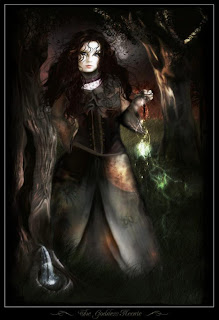 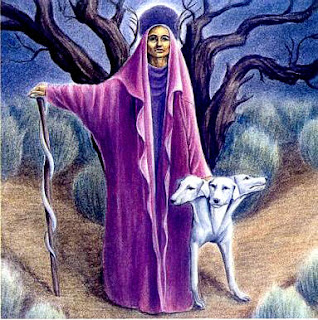 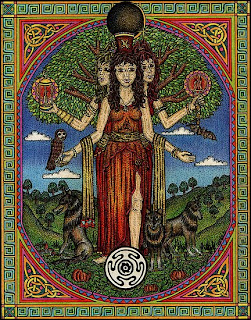