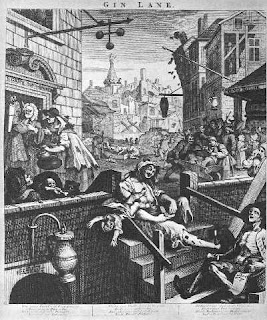 The English are supposedly sinking in a sea of booze and bad behaviour, the nadir of Tony Blair’s attempt top create what he called a ‘café culture.’ Actually, not that much has changed, and these things, and the moral and social concerns they raise, tend to move in distinct historical cycles. In the early seventeenth century Parliament passed no less than four statutes against drunkenness in a short twenty-year period.

However, the first great moral panic over patterns of alcohol consumption came with the emergence of the Gin Craze in the first half of the eighteenth century, so vividly illustrated in William Hogarth's print, with its depiction of decay, violence, death, suicide, corruption and infanticide. The damage caused by rivers of cheap gin was only really brought under control with the introduction of legislation in 1751, the same year that Hogarth's print appeared.

Gin Lane made an immediate impact on popular consciousness, on a public that was well-versed with the horrors of the gin cult, which included the case of Judith Defour, tried at the Old Bailey in 1734 for murdering her own child to sell its clothes to obtain more of the spirit. But Hogarth, it tends to be overlooked, was aiming his criticism not at alcohol consumption as such, but specifically at the cult of gin, considered to be a feminised drinking culture, symbolised by Mother Gin or Madam Geneva. At the same time as Gin Lane he also produced Beer Street, with lusty Englishmen drinking from foaming tankards! One version of this has a weedy Frenchman being manhandled by a strapping English artisan carrying a jug of beer.

Public drunkenness was frowned upon, rather than consumption in large quantities of the 'right kind' of alcohol, particularly by men, which was rather expected. The real change in attitude comes with the onset of the Industrial Revolution. It was one thing for agricultural labourers to consume huge quantities of beer and cider, and quite another for those charged with minding machinery to do so.

Urbanisation, moreover, made drunkenness a much more serious social issue, just as it had during the London Gin Craze, because concentrated heavy drinking could easily become a major problem of public order. It is only really from this time that tea-drinking was prompted as an alternative, and more wholesome, cult for the great British masses. Concerns about drinking, and the occasional moral panic this induced, resulted in stronger and stronger systems of licensing control. But, yes, nothing much changes. The British have always been drunkards; the British always will be drunkards. No Continental cafe culture for us, thank you very much! 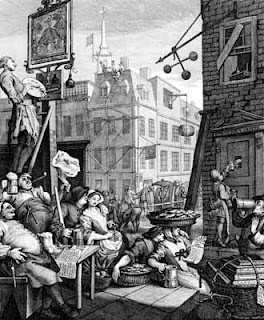 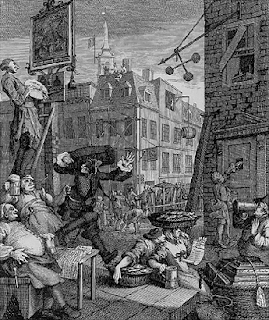