A Bite at Twilight 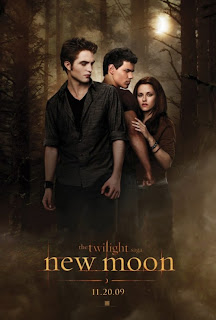 Last month the Vatican condemned Halloween as a festival of ‘terror and death; this month it has condemned vampires, specifically those coming in the movie, Twilight: New Moon. What larks! Monsignor Franco Perazollo, of the Pontifical Council for Culture, pontificated that the movie’s occult imagery was a “moral vacuum with a deviant message.” With a recommendation like that how could I possibly miss this latest instalment of the franchise? Besides I happen to like vampires and vampire movies and I could eat Robert Pattinson, who plays Edward Cullen in the movie, without doubt the tastiest vampire that I have ever seen. :-))

So, off I trotted into the moral vacuum hoping for a nice deviant message. Did I get one? No, of course I didn’t. I liked the first Twilight movie; not great cinema, by any measure, but a nice escapist fantasy and a love story between the human and the not so human. I love love stories but, as much as I like dishy vampires, I prefer mine a little higher on the scary scale. Besides Twilight: New Moon is really pitched at teeny-boppers and, well, I’m just a tad beyond that stage. :-)

The plot is simple enough, the same kind of romance across the divide that people who saw the original Twilight last year-or readers of Stephanie Myer’s novel-will be familiar with. In this latest version Bella Swan, played by Kirsten Stewart, Edward’s human and mortal girlfriend, wants to join him in immortality, wants to become a vampire herself. But Edward won’t have that; he loves her soul too much, so he dumps her! OMG, OMG, OMG :-))

Cast adrift by Edward, Bella eventually falls for one Jacob Black, played by Taylor Lautner, who turns out to be a werewolf belonging to a gang of werewolves. The fun simply goes on and on, with Bella caught in the middle in a kind of Montague and Capulet style romp. Well, the fun goes on up to a point, that is; I found my attention flagging towards the middle, as the plot started to flounder around somewhat. And the acting? Let me just say that Pattison and Stewart remembered their lines very well. This is a movie for diehard fans and there are enough of them, I know, to make it a huge success.

Twilight: New Moon is simply a rather shallow love story with some supernatural overtones. To insist that it conveys some sinister message is, quite frankly, ludicrous. What with fatuous interdicts embracing anything from Halloween to Harry Potter the Church establishment simply makes itself look out of touch and more than usually ridiculous, not, I think, the message that it wants to send out to young Catholics.
Posted by Anastasia F-B at 16:36