Yashka and the Women's Death Batallion 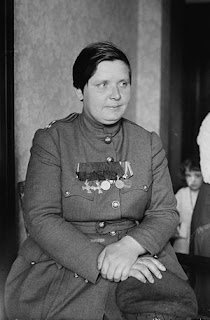 I was captivated recently by the story of Maria Bochkareva, the founder of the Women's Death Battalion in Russia during the First World War.

The daughter of a former serf, she entered the army in November 1914 by special permission of the Tsar. Bochkareva-or Yashka, as she was known to her comrades-first went into combat with the Siberian V Corps in 1915, part of the Russian Second Army. She and her battalion, some 250 strong, were in the first assault wave against a German position. Before the infantry advance the enemy lines had been subject to an artillery bombardment, designed to destroy the barbwire entanglements; but when Yashka's company advanced they found the wire intact. Unable to advance, and caught between the German machine guns and other Russian companies advancing from behind, 180 were killed or wounded before being ordered back. Yashka later recounted that, unable to endure the screams of the wounded soldiers trapped in no-man's land, she crawled out of her trench time and again during the night, and began dragging men back to the Russian lines. By dawn she had managed to rescue fifty soldiers this way.


Yashka initially welcomed the Revolution of February 1917, but was dismayed by the breakdown of discipline in the army caused by the spread of soldier's councils (soviets). At political meetings she declared that the fighting should go on until Russia was free of the enemy. Mikhail Rodzyanko, the President of the Duma, attended one such meeting, and invited her back to Petrograd to talk to Alexander Kerensky, then Minister of War. It was during the trip that she conceived of the idea of a Woman's battalion, to shame the male soldiers back into the fight. Kerensky approved and gave her a lieutenant's commission. The Death Battalion was duly formed, though in the end Yashka found only 300 volunteers willing to adhere to her strict standards of discipline. The unit went into battle in the Russian summer offensive of 1917, as part of the 172nd Division. They performed well under fire, though the men, by now thoroughly demoralised, were not sufficiently inspired by their example, and reacted with hostility. During two months at the front the Women's Death Battalion suffered an 80% casualty rate, not all at the hands of the Germans.

After the Bolshevik seizure of power in October Yashka was taken to the Smolny Institute, where she was interrogated by Lenin and Trotsky. Admiring her fighting record, they invited her to join their forces, but she refused. Still later, she tried to form another women's battalion to serve with the counter-revolutionary forces of Admiral Kolchak. Falling captive to the advancing Red Army, she was executed at Omsk by local Cheka units in May 1920. The wider world became aware of the story of this extraordinary woman with the publication in 1919 of Yashka, My Life. 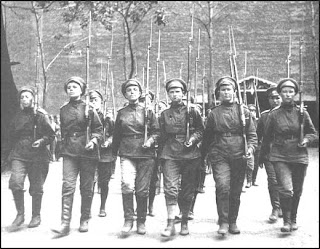 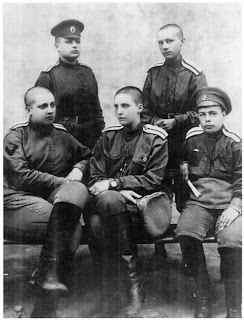