Not PC-in Praise of a Great Englishman 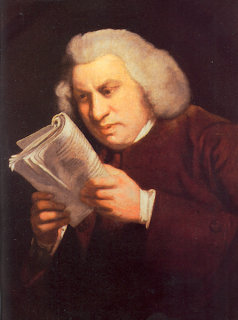 Lovers of the English language, or words in general, will be mindful that this year marks the three-hundredth anniversary of the birth of Doctor Samuel Johnson, the compiler of our first dictionary. His namesake, the equally larger than life Boris Johnson marked the occasion with a piece in The Daily Telegraph, pointing out how ill-fitted he would be as commentator in our PC world: Polly Toynbee would be in a permanent state of apoplexy! He was certainly no believer in the equality of the sexes;

Public practices of any art, and staring in men's faces, is very indelicate in a female.

A man is in general better pleased when he has a good dinner upon his table, than when his wife talks Greek.

Sir, a woman's preaching is like a dog's walking on his hind legs. It is not done well; but you are surprised to find it done at all.

Now add to the mixture an explosive xenophobia, one that still embraced the traditional English dislike of the Scots, the Irish and the French. Even the Americans don't escape a swipe;

Sir, they are a race of convicts and ought to be thankful for anything we allow them short of a hanging.

The French were a dirty lot and Ireland was worth seeing but not worth going to see. But his sharpest barbs were directed against the 'Scotch';

What enemy would invade Scotland, where there is nothing to be got?

Asked by a Scot what Johnson thought of Scotland: "That it is a very vile country, to be sure, Sir" "Well, Sir! (replies the Scot, somewhat mortified), God made it." Johnson: "Certainly he did; but we must always remember that he made it for Scotchmen, and comparisons are odious, Mr. S------; but God made hell."

The noblest prospect which a Scotchman ever sees, is the high road that leads him to England!

Much may be made of a Scotchman, if he be caught young.

His distaste even makes its way into The Dictionary, where the definition of oats is given as;

A grain which in England is generally given to horses, but in Scotland supports the people.

Still for all that, for all of his curmudgeonly grumpiness, and the generally reactionary, high Tory nature of his views, he had a huge generosity of spirit. Though no believer human equality in general he was outraged by slavery. After the outbreak of the American Revolution he remarked;

How is it that we hear the loudest yelps for liberty among the drivers of negroes?

One of his most intimate human relationships, moreover, was with his black servant, Francis Barber, generally known as Frank, whom he treated more or less like a son, solicitous over his education, and making him the chief beneficiary of his will. And despite all of the barbed humour and sallies directed at the Scots his most fruitful intellectual relationship was with James Boswell, a Scottish lawyer, whose tome-like Life of Johnson, one of the true landmarks of English literature, is the source of some of the more memorable bone mots, including a few of my favourites;

That fellow seems to me to possess but one idea, and that is a wrong one.

Sir, you have but two topicks, yourself and me. I am sick of both.

When a man is tired of London, he is tired of life; for there is in London all that life can afford.

I am willing to love all mankind, except an American.

A Frenchman must be always talking, whether he knows anything of the matter or not; an Englishman is content to say nothing, when he has nothing to say.

All theory is against the freedom of the will; all experience for it.

It was his own great project, The Dictionary of the English Language, the standard reference work until late into the nineteenth century, which caused the most astonishment when he was alive:

Adams: But, Sir, how can you do this in three years?

Johnson: Sir, I have no doubt that I can do it in three years.

Adams: But the French Academy, which consists of forty members, took forty years to compile their Dictionary.

Thus is the proportion of Samuel Johnson, a great lexicographer and a great Englishman. So, here is to you, Doctor Johnson, with all your sexism, with all your xenophobia, too big for this little age.
Posted by Anastasia F-B at 16:19