You've Got Blood on Your Hands 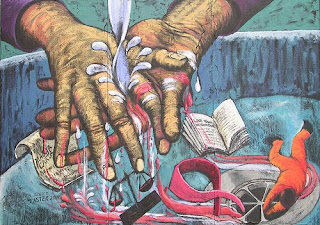 Do you wonder why Tony Blair’s Euro bandwagon, at once so strong, died not with a bang but a whimper? Among the reasons offered is that Britain still has a less than complete relationship with the rest of Europe, not being within the Euro zone itself and not being party to the Schengen Agreement. And, of course, there is the decision to go to war in Iraq, which does not make him the most popular figure across the Continent, though this consideration obviously weighs more heavily with ordinary people rather than politicians, who have continued to fete this vile man despite his bloody hands.

If the Eurocrats really wanted Blair I’m convinced that Iraq would have been but a minor consideration. Ah, but think again; he really was hoist by the petard of popular contempt, at least according to a snippet of information that I have come across. In October he had the neck to attend a memorial held at the Guildhall for those killed in Iraq, who included Lance Corporal Shaun Brierly, who died in March 2003. When Blair made to shake hands with Peter Brierly, Shaun’s father, he was snubbed with the words-“I’m not shaking your hand; you’ve got blood on it.”

This may have passed but the story reached Paris. There, according to senior government sources, Nicholas Sarkozy told his staff that the EU could not risk having a man as president who might very well be confronted by similar angry scenes. At the end of October he met with Angela Merkel and both agreed that Blair was indeed a potential public relations disaster. Various excuses were devised to excuse Sarko’s change of direction but the ‘blood on your hands’ confrontation is thought to be the decisive factor. Mister Brierly has expressed his pleasure. Sometimes, just sometimes, the things people do and say really do matter in changing the course of history.
Posted by Anastasia F-B at 16:27