Jarndyce and Jarndyce comes to The Hague 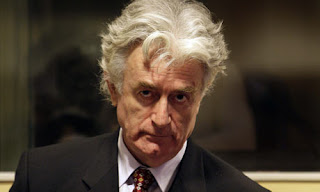 It's a race, really, to see who dies first: Radovan Karadzic or justice. Since justice is-supposedly-immortal, I suppose it has to be Karadzic, taking the same road as Slobodan Milošević. No, justice cannot die, but it can turn into a pantomime; it can turn into the 'International Tribunal for the Prosecution of Persons Responsible for Serious Violations of International Humanitarian Law Committed in the Territory of the Former Yugoslavia.' Phew; even saying it takes time. What takes even more time is the process itself, horribly expensive, tied up in the most absurd legal niceties and the desperation to appear politically correct, not to upset human rights.

Milošević made a mockery of the court, and Karadzic is obviously going the same way. He initially refused to appear, saying he needed nine more months to prepare his defence. Then he changed his mind, coming to court to play that ace card-his 'fundamental rights had been violated' by the judges. Then he started to dictate terms: he would continue his boycott unless he had an adjournment. Tiring of this spectacle the judges have now imposed counsel on the defendant, accused of war crimes and crimes against humanity. But he had a partial victory, for the trial has now been delayed until March of next year. I would urge the relatives of those who died in places like Srebrenica, all those who are looking for answers, not to be over optimistic. Justitia does not rule in The Hague; Old Father Time does.

I can't make sense of this court. It's not as if we haven't been here before, constructing a process where there is no process. The whole thing is not just absurdly complex; it's hopelessly second-rate. If these judges can't manage second division players like Milošević and Karadzic just imagine if they had been faced with the likes of Hermann Göring, who danced so effectively, at least for part of the time, at Nuremberg. I rather suspect if the judges involved in the 'International Tribunal for the Prosecution of Persons Responsible for Serious Violations of International Humanitarian Law Committed in the Territory of the Former Yugoslavia' (exhausting to read, more exhausting to write!) had been engaged the trail of the major Nazi war criminals would have lasted well into the 1950s, perhaps beyond.

The lawyers must be happy, though, in this international parody of Jarndyce and Jarndyce. Here is how Dickens described that incomprehensible marathon;

Jarndyce and Jarndyce drones on. This scarecrow of a suit has, in course of time, become so complicated that no man alive knows what it means. The parties to it understand it least, but it has been observed that no two Chancery lawyers can talk about it for five minutes without coming to a total disagreement as to all the premises. Innumerable children have been born into the cause; innumerable old people have died out of it. Scores of persons have deliriously found themselves made parties in Jarndyce and Jarndyce without knowing how or why; whole families have inherited legendary hatreds with the suit. The little plaintiff or defendant who was promised a new rocking-horse when Jarndyce and Jarndyce should be settled has grown up, possessed himself of a real horse, and trotted away into the other world. Fair wards of court have faded into mothers and grandmothers; a long procession of Chancellors has come in and gone out; the legion of bills in the suit have been transformed into mere bills of mortality; there are not three Jarndyces left upon the earth perhaps since old Tom Jarndyce in despair blew his brains out at a coffee-house in Chancery Lane; but Jarndyce and Jarndyce still drags its dreary length before the court, perennially hopeless.

And just as the costs went up and up in that process so, too, do they in The Hague. I have no idea what the present costs will eventually be, but past cost for one two year period amounted to almost three hundred million dollars. Yes, I know that the people of Bosnia, those who lost relatives, need closure, need some kind of justice. But this is not justice; this is a mockery of justice. Worse than that: it's a mockery of the dead.
Posted by Anastasia F-B at 15:58