The Age of Satan 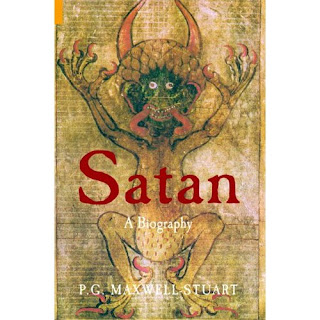 I’ve not long finished Satan: a Biography by P G. Maxwell-Stuart, an expert on the history of witchcraft and magic in Europe. It’s a stimulating account, sober and scholarly rather than sensationalist, which explores perceptions of the devil in Europe and beyond, from the earliest times right up to the present day; from religious fears to cultish hysteria.

It’s also, I suppose, an exploration of the function of the great adversary, the purpose he has served through the ages; from seducer of Eve to the friend and comforter of witches. The remarkable thing is the range of identities he could and did assume, not always that of the grotesque and frightening but the beautiful and the seductive. I never really understood why Satan would ever want to come in the form of the beast if his mission was to entice people to take his particular path, rather than the path of God. :-)

Arguably the most enticing part of this book is the way in which Maxwell-Stuart takes confessions of satanic pacts, which one naturally assumes to have been forced, usually by torture or the threat of torture, and tales of demonic possession, at face value, as evidence of a ‘genuine’ experience, evidence which he tests and explores. Dreams, the effects of drug-taking and even real life encounters are all given serious scholarly attention. The important thing here is that the author avoids the usual condescending view of the past. For the most part his account proceeds through the ‘age of faith’, when the supernatural, the experience of the supernatural, was a reality accepted by all sections of society, from scholar to scullery maid.

By the nineteenth century the great division had set in between ‘reason’ and ‘superstition’, casting Satan into the uncertain realms between disbelief and sensationalism. But Satan is always with us, a personification not of the beastly but the all too human; a personification of the darker side of humanity. If the eighteenth century was the age of reason then the twentieth century surely became the age of Satan. Is he a symbol or is he a living presence? Well, I leave you to make up your own mind. :-)

The Demon is always moving about at my side;
He floats about me like an impalpable air;
I swallow him, I feel him burn my lungs
And fill them with an eternal, sinful desire.

Sometimes, knowing my deep love for Art, he assumes
The form of a most seductive woman,
And, with pretexts specious and hypocritical,
Accustoms my lips to infamous philtres.

He leads me thus, far from the sight of God,
Panting and broken with fatigue, into the midst
Of the plains of Ennui, endless and deserted,

And thrusts before my eyes full of bewilderment,
Dirty filthy garments and open, gaping wounds,
And all the bloody instruments of Destruction! 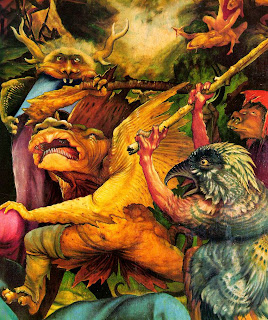 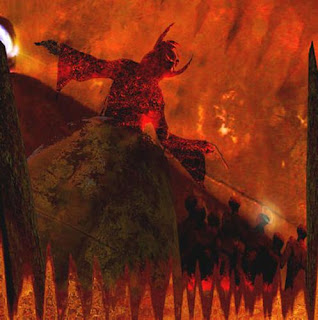 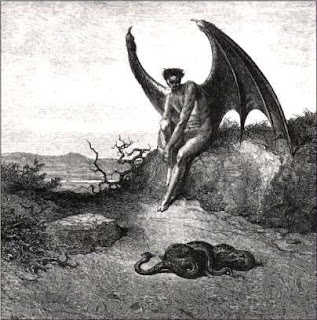 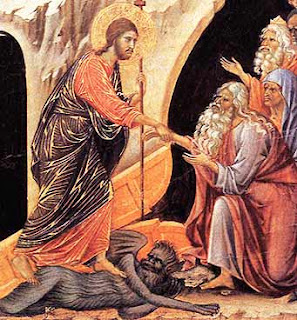 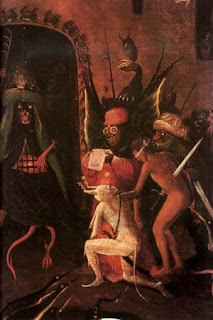 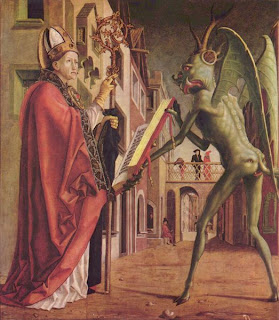