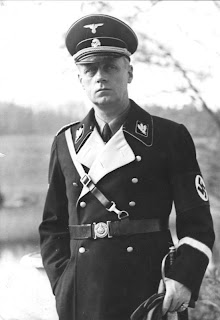 Is it possible to say anything positive about Hitler's 'Bismarck'? If the Nazi regime was a disease then Joachim von Ribbentrop was one of the symptoms. He was shown at his most ridiculous at the Nuremberg Trial. Under questioning from Sir David Maxwell Fyfe, Ribbentrop denied having bullied President Hácha of Czechoslovakia into accepting German occupation. "What further pressure could you put on the head of a country except to threaten him that your army would march in and your air force bomb his capital?" To which Ribbentrop replied, "War, for instance."

Hitler was always impressed by Ribbentrop's suave manners and social contacts, once telling Herman Göring that he knew Lord this and Lady that. Göring, who had little time for the Foreign Minister as a man or a diplomat, quickly responded, "Yes, but they know Ribbentrop." Even Hitler took the point.

Why was he ever appointed Foreign Minister? For the simple reason that Hitler distrusted the old establishment, represented above all by Konstantin von Neurath, the Foreign Minister he had inherited from the last stages of the Weimar Republic. Ribbentrop, moreover, was always keen to offer the kind of radical solutions that Hitler favoured. He won Hitler's respect by the two great coups of Nazi diplomacy: the Anglo-German Naval Agreement of 1935 and the Nazi-Soviet Pact of 1939. The first undermined both the provisions of the Versailles Treaty, and the whole concept of collective security supposedly embodied in the League of Nations, by allowing Germany to expand its navy in a bi-lateral agreement with England. The second allowed Hitler to go to war with Poland, free from possible repercussions by the Soviets. But in both cases Ribbentrop did no more than push at doors that were already partially opened. The agreement with the Soviets, moreover, undermined the Anti-Comintern Pact, another of Ribbentrop's triumphs, angering the Japanese, and thus doing much to ensure that they stood aside in any future German war with Russia.

I suppose, in the end, the principle reason Ribbentrop became Foreign Minister, despite being a complete failure when he was German Ambassador in London, was because he was a useful cipher. Hitler already had a programme: he simply wanted men in place who were able to fulfil his vision. But for Ribbentrop failure followed hard upon the heels of triumph. He had assured Hitler that Britain and France would not go to war over Poland; and when they did, the Nazi Bismarck's star slowly began to sink. In the last stages of his active ministry he attempted to play a degenerate form of the 'Great Game', not fully understanding that, for Hitler, rapprochement with Russia was but a temporary expedient.

After the collapse of France in 1940 Ribbentrop worked actively towards the creation of a four-power pact against England, embracing Germany, the Soviet Union, Italy and Japan, while at the very same time Hitler was working towards Barbarossa. As the war progressed Ribbentrop had less and less to do, other than become one of the minor architects of the Holocaust. Amongst the Nazi elite he was treated with diminishing respect, and even Hitler encouraged Walther Hewel, a diplomat attached to the Führer's headquarters, to make fun at his expense. As a final insult he was replaced as Foreign Minister in Hitler's will by Arthur Seyss-Inquart, even though Ribbentrop, unlike Göring and Himmler, had been guilty of nothing but absolute loyalty.

The real answer to the question how such a man could become Foreign Minister of an important world power is, paradoxically, yet another question: how was a man like Hitler ever in a position to appoint him in the first place?
Posted by Anastasia F-B at 16:17