Never Fall in Love with a Royal! 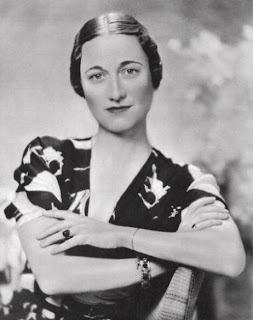 It continues to be believed by some that Edward VIII’s affair with Wallis Simpson was universally unpopular, uniting the political establishment, the aristocracy and the people in a single view, when, in fact, all of the contemporary evidence suggests the contrary.

Edward was popular with ordinary people, and he received a great many letters of support, including one from Sunderland, in which he is told of Wallis "She is worth fighting for. I am only one of millions of working trod downed class who wish you every happiness with this Lady." Another from South Wales said "It is character that Counts here, and in the Great Beyond, not a Tytle."

In December 1936, with the Abdication Crisis well underway, an edition of the Daily Mail appeared with the headline The People Want their King. There was even speculation that Winston Churchill was going to form a 'King's Party' to bring down the government of Prime Minister Stanley Baldwin.

Why was Wallis hated by British society? Setting all of the ridiculous stories to the side-including the contention that she had an affair with Joachim von Ribbentrop, and that she was a 'Nazi agent'-it reduces to one thing: simple snobbery. For many, including Lady Diana Cooper, Wallis was cast in the role of Becky Sharp, the cunning social-climbing heroine in William Thackeray’s novel Vanity Fair. Low-class, a divorcee, an American-she had nothing to recommend her, nothing that would make her acceptable to society.

She had one advantage, though: Edward loved her, and that made her 'crime' even greater. In the end, the establishment view prevailed, to the extent that stories that Wallis was a Nazi agent still manage to surface from time to time, along with the even more ridiculous conjecture that she ensnared Edward using sexual tricks she had learned while in Shanghai. Never, ever, fall in love with a royal!
Posted by Anastasia F-B at 16:32