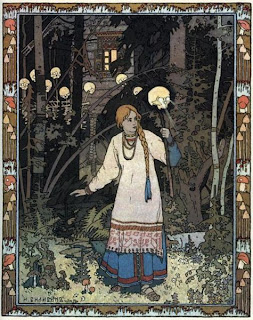 I’ve been reading mythologies, fairytales and folklore since I was about six years old. I began with Robert Graves’ The Greek Myths in a version especially edited for children. I fell in love with the quarrelsome and all too human Greek Pantheon, from Zeus to Artemis, reading everything I could find. By the time I was eight I had graduated on to Homer!

These explorations stimulated my appetite for new sources of inspiration, new and different tales. I exhausted every library I could find, every anthology that was available, and I do not exaggerate! Oh, how I loved them all, the tales collected by the Grimm Brothers in Germany and Asbjørnsen and Moe in Norway, as well as Andrew Lang’s Fairy Books. But the folk tradition that made the greatest impact on me was that of the Slav people, especially the Russians. And the one character in Russian tradition that both delighted and terrified me was Baba Yaga, the great witch herself, the greatest of all the witches.

Baba Yaga epitomises all of the ambiguity of witchcraft, of nature itself, perhaps, malevolent and benevolent by turns. She is for me the most perfect symbol of witchcraft, the most perfect avatar, standing in total contradiction to Wicca, that crypto-hippie cult. She is scary, yes, but she is also grand; she can be terrifically wicked but she can also be just and solicitous.

In Russian tradition Baba Yaga, though the ultimate boogie-woman, represents something more than witchcraft; she is also a residue from pre-Christian days, perhaps the Corn Mother herself, banished to the woods by the missionaries of the new faith. But there she stayed and never went away.

As an underworld goddess controlling life and death, Baba Yaga was the last hope for the infertile. She could also perform miracle cures. But approaching her carried considerable dangers; for she was just as likely to curse as to cure. Yes, she knows all of the secrets of nature, all of the sources of botanical healing. Knowing is one thing; revealing is quite another.

So, Baba Yaga is the Mistress of all Witches, the Primal Mother, nurturing and destructive. But unlike more traditional goddesses or semi-divine figures she was not at all remote, living, rather, deep in the forests of old Russia in a cottage named Izbusha, which stands by tradition on chicken legs. This cottage will move at Baba’s command; Izbushka, Izbushka! Stand with your back to the forest and your front to me.

Izbushka is a fearsome looking place, made of bones collected by Baba Yaga herself. Leg bones form the doorstep; a mouth with teeth serves as the lock; the fence is formed from bones toped by skulls. If one approaches at night the first thing to be seen is light glowing from the eye-sockets. Inside there is a large oven which symbolises the cycles of life, from birth to death.

If the house is fearsome the great witch is even more so. She has iron teeth protruding like the tusks of a boar. Her hands are tipped with claws and she wears a necklace of skulls. She comes through the air not on a broomstick but in a huge mortar which she steers with a pestle, sweeping away her traces as she moves.

It’s while seated in her mortar that she grinds out life and death, just like a Corn Mother. Her flight recalls that of the Goddess Diana on the wild hunt, except her companions are not women but by crows, ravens and owls. Again, according to some sources, she is also like Diana in that she represents the moon. In this form she eats her own body in a cannibal feast and then regenerates, regulating the fertility of women and of the earth.

The moon, the waxing and the waning of the moon, also gives an indication when it is safe to approach her and when it is not. When it is full her door is open, as the witch is replete, happy and pregnant. But when it wanes her womb and belly are empty. Those who approach then are likely to end as her next meal. :-) 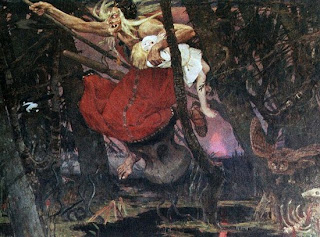 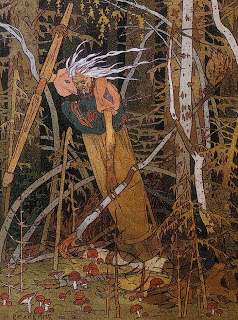 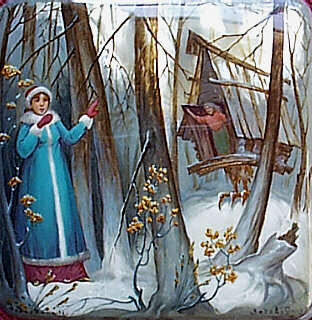 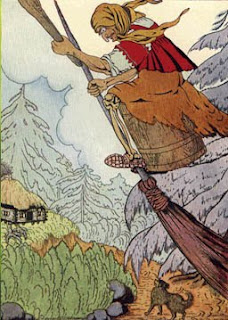