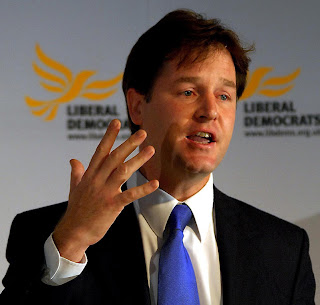 Now here’s an interesting little tale, one that took me by surprise because it concerns Nick Clegg, arguably the most boring man in British politics; nice, yes, but boring. Nice and boring, the very qualities that make him an admirable leader of the Liberal Democrats, the nice but boring party.

The odd thing is I have no clear idea what a Liberal Democrat is, never having met one, or at least never having met anyone who confessed to being a Liberal Democrat. I have a perfect image in my head of a Tory and even an image of a Socialist, a sort of urban Neanderthal, but all ‘Liberal Democrat’ conjures up is something fuzzy and unreal; neither this, nor that, nor anything in particular; no passions, no commitment, no energy-just nothing. Oh, that’s not quite right: there is Jenny Tonge, better known to her friends as Baroness Boom or Jihad Jenny. She believes alright, she believes there is something to be said for suicide bombers. My goodness; not so boring after all, though Baroness Boom is not a subject that Nick Clegg likes to dwell upon.

For those who do not know her Tonge is the former Liberal Democrat MP for Richmond Park. In 2004 she was asked to step down from the Party front bench after she made a speech justifying Palestinian suicide bombers, saying that if she had to live in similar circumstances she might consider becoming one herself. But this did not stop her being elevated to the Lords, where, in January of this year, she took up the Health portfolio.

But it isn’t just health she booms on about; continuing with her hostility to the state of Israel she has embraced some nice old fashioned conspiracy theories, the sort of thing that might be found in The Protocols of the Elders of Zion. In 2006 she announced that the “…pro-Israeli lobby has got its grips on the Western world, its financial grips. I think they have probably got a certain grip on our party.” I have no idea who has ‘a grip’ of Baroness Boom but commenting on this in the latest issue of Standpoint Douglas Murray writes “The idea that anyone has a grip on the LibDems would certainly surprise its membership.” Are they capable of surprise? I suppose one would have to wake them up first!

Anyway, Clegg was confronted by Murray on Boom’s outbursts after a lecture he gave earlier this year to the European Institute for the Study of Contemporary Anti-Semitism. He was told that if she said anything like this ‘on his watch’ she would be in serious trouble. Unfortunately for poor old Corporal Clegg she has said worse with him in charge of the rag-tag army.

This year, as Murray reports, she met Khaled Mesha’al, the political leader of Hamas, praising him as “shrewd, plausible and actually very likeable.” Last year she shared a platform with Azzam Tamini, a British Palestinian activist and another enthusiast for suicide bombing. On this occasion she said that the ‘Jewish lobby’ in the United States was responsible for all of the world’s ills. All of them? Really? That’s nice to know; it makes things so simple if one happens to be looking for a final solution for all of the world’s ills.

When Murray brought these inconvenient facts to Clegg’s attention he dodged the issue, pretending that he became leader a year later than he had. Ah well, when the going gets tough a Liberal Democrat leader hides behind a lie. Best if you just go home, Nick, and prepare for government, you and Baroness Boom. 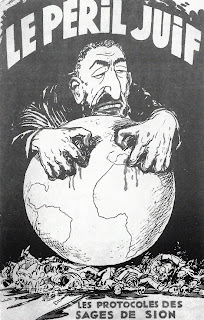 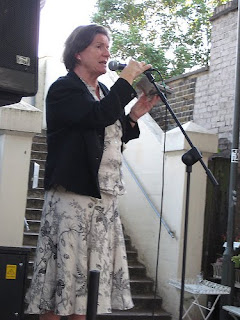