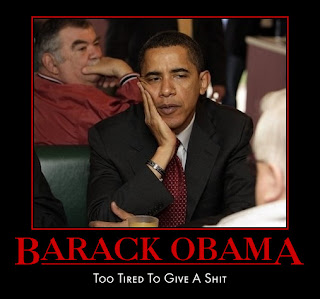 What was the most embarrassing political moment of this month, perhaps of this year? For me there is no doubt about the answer: it was Obama in China, about which no opera will ever be written. Is this really an American President? Where was the courage, where was the determination to speak against injustice, where was the frank exchange of views: where was Tibet?

Oh, well, on reflection, how could he raise such a sensitive issue when he came to China a little like a customer heavily in debt summoned to the office of the bank manager? Better to stick to some ineffectual mumbling about firewalls in a meeting packed with the youthful cardres of the ruling oligarchy. America may rule the world but it seems patently obvious that China rules Obama.

Have you read Catch 22, Joseph Heller’s wonderful black comedy set among the United States Army Air Force in the Second World War? I’ve a feeling that I may have said this before, but I shall risk repeating myself: Barack Obama reminds me of the character absurdly named Major Major Major, who joined the Air Force as a private and was immediately promoted to the rank of -you guessed it-Major! The Major is the kind of man who, when someone knocks at his door, climbs out of the window. Major Major is so good at disappearing that he eventually disappears altogether from the novel.

OK, Obama has not-yet-climbed out of the Oval Office window, but he sits there in an absolute agony of indecision, making his country look every weaker by the day. The army in Afghanistan has had to wait months for him to make up his mind on reinforcements, even though it was he himself who originally said that this war commanded a high priority, a higher priority than that waged in Iraq. Even if these reinforcements arrive in the numbers requested the Taliban has already received a huge boost to its morale. Waiting and dithering, after all, is the last stage before cut and run.

I do not know how Americans themselves feel about this but I can make no sense at all of this administration’s foreign policy. Is there a pattern other than weakness and procrastination? Is there a strategy here that I am unaware of? Obama looked weak in China; he looks even weaker in the Middle East. Here he demanded that Binyamin Netanyahu, the Israeli Prime Minister, stop all work on the on building settlements in the occupied territories. When Netanyahu refused he was praised by Hilary Clinton, the Secretary of State! For me the whole thing is laughably incomprehensible, a real life version of Catch 22, where nothing is quite as it seems. I suppose it’s only right to finish with a quotation from the novel, entirely appropriate, I think:

That's the way things go when you elevate mediocre people to positions of authority.