They Called her Babylon 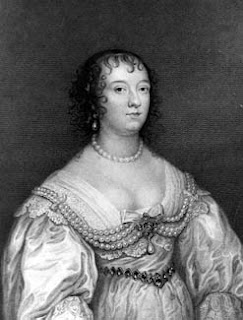 Here is a story about one of my favourite English heroines

Old Lathom House, situated near Ormskirk in Lancashire, has long gone. In the seventeenth century, during the time of the English Civil War, it was the stronghold of the Stanley earls of Derby. The defences were formidable. There was a moat eighteen meters wide and eight meters deep. Within its confines there was a wall eight meters thick, punctuated by nine towers, one flanking the other. In each of these towers there were six pieces of ordnance, three looking in one direction, and three in the other. In the centre, protected by the moat and the walls, stood the main keep, known as the Eagle Tower. But Lathom had a defence more formidable than stones, guns and towers: it had Charlotte de la Tremoüille, Countess of Derby.

In 1644, during the height of the struggle between King and Parliament, James, the seventh earl of Derby, a committed royalist, was ordered to secure the Isle of Man, a hereditary possession of his family. He left Lathom, a royalist island in a puritan sea, in the care of his wife, Charlotte. For the Parliamentary army this was an opportunity, an opportunity to clear Lancashire of the last remaining royalist strongpoint. The task was given to Sir Thomas Fairfax, Black Tom. As he advanced towards Lathom with a force of some two thousand men, equipped with a siege train, the Countess was denounced in sulphuric terms by a puritan minister in Wigan, drawing his text from the Book of Jeremiah:

Put yourself in array against Babylon round about; all ye that bend bow shoot at her; spare no arrows; for she has sinned against the Lord.

When Fairfax arrived before the Lathom in late February 1644 Charlotte had no more than three-hundred men within, some professional soldiers, others not. In a deliberate attempt to conceal the weakness of the defence, the Countess prevaricated when Fairfax called upon her to surrender Lathom on terms. But in the end she called defiance after the latest parley and exchange of proposals;

That she refused this offer, and was truly happy that hers had been refused, protesting that she would rather hazard her life than offer the like again; and that, though a woman and a stranger, divorced from her friends and robbed of her estate she was ready to receive the utmost violence, trusting in God both for protection and deliverance.

With the siege beginning in earnest, the Lathom garrison, as weak as it was, did not await events. Rather repeated surprise sorties were launched against the attackers and the artillery emplacements. In the meantime the Stanley gamekeepers found a new role as expert snipers, shooting from the towers, killing and demoralising the parliamentary soldiers.

At the end of March, Fairfax, whose bombardment made as little impression as his calls for surrender, left for Yorkshire, delegating the furtherance of the siege to Colonel Alexander Rigby, the MP for Wigan, and a fanatical puritan. Although the artillery assault began in real earnest Lathom and Charlotte remained defiant and determined. On 25 April a frustrated Rigby issued yet another summons, the occasion for the Countess’s finest moment;

On Thursday he sends his last message, as he calls it, a furious denunciation to her ladyship to yield up Lathom House, and all the persons, and goods, and arms within it, into his hands, to receive the mercy of the parliament and to return answer the next day by two o’clock. Her ladyship having read this, with a brave indignation calls for the drum, and tells him that, ‘a due reward for his pains is to be hanged up at her gates; but’ sys she, ‘thou art but a foolish instrument of a traitor’s pride; carry this answer back to Rigby’ (with a noble scorn tearing the paper in his sight), ‘and tell that insolent rebel, he shall neither have persons, goods, nor house; when our strength and provision is spent, we shall find a fire more merciful than Rigby’s, and then, if the providence of God prevent it not, my goods and house shall burn in his sight; and myself, children, and soldiers, rather than fall into his hands, will seal our religion and loyalty in the same flame’, which being spoken aloud in her soldier’s hearing they broke into shouts and acclimations of joy, all closing with this general voice, ‘we shall die for his majesty and your honour-God save the king!

This was followed early next morning by yet another sortie, when a battery was captured. By now, acting on the pleadings of the Earl of Derby, Prince Rupert, on his way to York with the main royalist army, diverted to Lathom in late May. Rigby, aware of his approach, withdrew having seen yet another plea for surrender rejected. Having delayed his retreat for too long he was routed at Bolton by Rupert. Afterwards his colours were sent to Charlotte as a trophy.

Bless your memory, my dear lady, and may your name last forever.