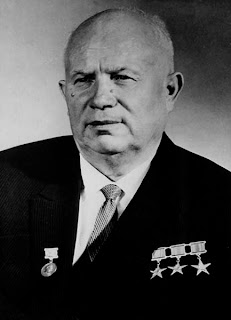 To begin with it should be noted that the whole speech was built on the oddest of paradoxes: a denunciation of Stalin's personality cult and authoritarian style by a man who had spent the three years since the dictator's death in undermining collective leadership, and establishing his own unparalleled power! By the time of the 20th Congress, in other words, Khrushchev’s political authority was almost as great as that previously enjoyed by Stalin.

Delegates at the Congress were given no advance warning of what to expect. Indeed, proceedings were opened by Khrushchev’s call for all to stand in memory of the Communist leaders who had died since the previous Congress, with Stalin being mentioned in the same breath as Klement Gottwald. Hints of a new direction only came out gradually over the next ten days, which must have left those present highly perplexed. On the 25 February, the very last day of the Congress, it was announced that an unscheduled secret session had been called for the Soviet delegates.

The speech itself began with vague references to the harmful consequences of elevating a single individual so high that he took on the "supernatural characteristics akin to those of a god." Khrushchev went on to say that such a mistake had been made about Stalin. He himself had been guilty of what was, in essence, a distortion of the basic principles of Marxism-Leninism. The attention of the audience was then drawn to Lenin's Testament, copies of which had been distributed, criticising Stalin's 'rudeness'. Further accusations, and hints of accusations, followed, including the suggestion that the murder of Sergey Kirov in 1934, the event that sparked of the Great Terror, could be included in the list of Stalin's crimes. While criticising the Man, Khrushchev carefully praised the Party, which had the strength to withstand all the negative effects of imaginary crimes and false accusations. The Party, in other words, had been a victim of Stalin, not an accessory to his crimes. He finished by calling on the Party to eradicate the cult of the personality and return to "the revolutionary fight for the transformation of society."

So, what were his motives? Was it really a call for a return to Leninist 'collective leadership' destroyed by Stalin? Well, here we have to remember that Lenin himself had only called for collective leadership in his final days, in the belief that no single individual was fit to follow in his singular path. Khrushchev himself, moreover, had, as I have said, effectively destroyed the new forms of collectivity that emerged after Stalin's death in 1953. In a sense, the Secret Speech was his own triumphal declaration, and he used it to undermine still further some senior Soviet politicians, including Georgy Malenkov and Kliment Voroshilov.

The implication was clear enough: he was innocent and the rest were guilty, though the simple truth was that he was just as bloody as any of the others. He was simply shifting the burden of responsibility. Exempting himself and blaming others: the whole speech was not about principles and ideals-it was about politics, and it was about power. Khrushchev had to demolish Stalin to establish his own imperium; Augustus had to give way to Tiberius. It may be of passing interest to make note of the fact that Stalin's portrait continued to hang in Khrushchev’s office long after 1956, as a kind of spiritual avatar. And those who took the speech at face value were soon to face the simple truth that the ideal was not reborn
Posted by Anastasia F-B at 16:32