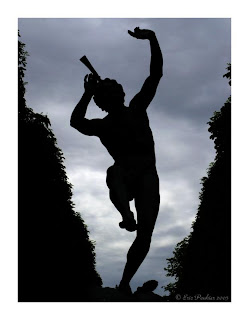 In reading about the life of Aleister Crowley I noted with interest that he believed that the Great God Pan is the only one of the ancient deities to have made it into the modern world, which corresponds exactly to my own view. It occurs to me, though, that there is another dimension of Pan that I have not properly explored. I know of Pan the Protector, the Piper at the Gates of Dawn, from The Wind in the Willows. I know of Pan as the elemental force of sexual passion from Knut Hamsun’s novel of the same name. But what of Pan angry; what of Pan alienated from humanity, as humanity is alienated from nature?

What immediately came to mind is Algernon Blackwood’s marvelous short story The Willows, where nature is actively hostile to a human presence. Remember the words of the Swede, the narrator’s companion as the threat closes around them,

There are forces close here that could kill a heard of elephants in a second as easily as you or I could squash a fly. Our only chance is to keep perfectly still. Our insignificance perhaps may save us.

The interesting encounter for me is that the encounter with the God angry is on an island in a river, just as Mole and Ratty encounter him benevolent in exactly the same circumstances. Nature is being tortured; Pan is angry with humanity. To anger the Great God is a mistake beyond all mistakes.
Posted by Anastasia F-B at 16:36