It’s a while since I’ve blogged on the political situation in Honduras, so I thought I would just bring things up to date, especially as a new presidential election was held at the end of last month.

In June of this year Manuel Zelaya, then president, was ousted in a peaceful military coup and bundled over the border, after he threatened to twist the Honduran constitution in a way that allow him to perpetuate his power, forcing his unhappy country down the same dictatorial road as that thug Hugo Chávez in Venezuela. An interim government was then set up under the guidance of Robert Micheletti pending the November election. The action in Honduras taken in defence of the constitution was condemned by the world’s political community, with Barack Obama joining such well-known democrats as Chávez, Fidel Castro and Daniel Ortega in calling for the restoration of Zelaya.

Despite all, despite losing millions in aid, the government of Honduras has withstood all pressure. The ex-president, much given to wearing large cowboy hats, tried to organise an invasion of the country from Nicaragua, which flopped in a comic-opera fashion. Zelaya then sneaked back into Honduras in September, where he and his hat immediately took refuge in the Brazilian embassy in Tegucigalpa, the capital, from where he issued a call to arms; he called but no-one came. So there he is and there he stays, surrounded by the Honduran army. Either the people were too intimidated by the government’s show of force or, what seems more likely, most of them simply could not care less about Zelaya…or his hat.

Although the Obama administration condemned the June coup it has now backtracked, under pressure from the Republicans in Congress, who saw the de facto government as an effective bulwark against Chávez and the forms of left-wing demagoguery that have been creeping like cancer across much of Latin America. The US government is now set to recognise the legitimacy of the presidential election, though it originally refused to do so if Zelaya was not restored to power first.

So, the election proceeds in the face of intimidation and threat from the likes of Chávez. The two main candidates are Pofirio Lobo of the National Party, favoured to win, and Elvin Santos from Zelaya’s own Liberal Party. Neither candidate has mentioned the Cowboy himself, in a determined effort at a fresh beginning. Micheletti, the interim president, is not standing, part of a determined effort to give the vote as much democratic credibility as possible. I wish the people of Honduras well in their courageous fight against tyranny, against Chávez, against communism, against Zelaya and against that hat! 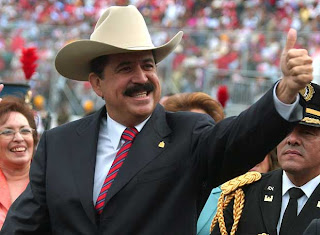