My Thoughts on the Peterloo Massacre 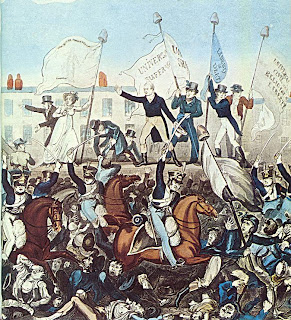 I wrote a blog earlier this year on Iran (I Met Murder on the Way) I quoted the last four verses of Shelly's The Masque of Anarchy, an angry poem written as a response to the news of the attack by the Manchester Yeomanry on a large and peaceful crowd gathered on St Peter's Field's in August 1819 to hear Henry Hunt, better known as Orator Hunt, call for Parliamentary reform. Soon after the incident, which resulted in the deaths of up to fifteen people and the injury of hundreds more, was being referred to as 'Peterloo', in mocking and ironic reference to the Battle of Waterloo, which had taken place only four years earlier.

Though not that well known outside England this is an incident that, in simple political terms, could very well stand alongside Russia's Bloody Sunday and the Amritsar Massacre in India. Having quoted Shelly, in the context of the repression being carried out today in Iran, I was asked by another user to offer a contemporary view on Peterloo. It's a timely request, as this year marks the one hundred and ninetieth anniversary of this milestone in English radical history. So, here is my perspective.

With events like this, events like Bloody Sunday and Amritsar, the first response is most often to look for a pattern, to determine, before all else, who was to blame. Shelly has no doubt at all: the crime is placed firmly at the threshold of the reactionary government of Lord Liverpool, though not Liverpool himself, one of the great 'blank spaces' of English history, a kind of Gordon Brown of his day. No, there are others more culpable, most notably Lord Castelreagh, the Foreign Secretary, who carries a heavy burden and some of the most memorable lines in English poetry:

I met murder on the way-
He had a mask like Castelreagh-
Very smooth he looked, yet grim:
Seven blood-hounds followed him.

It isn't quite fair, but then poetry, like politics, seldom is. Clearly what I have to do now is to sketch the background before proceeding to touch on the long-term significance of those events in Manchester on that August day all those years ago.

England emerged from the Napoleonic wars in an anxious mood. A lot had changed but the old landed elite who dominated Parliament and government, in much the same corrupt way they had since the emergence of Robert Walpole a hundred years before, was determined on 'normalcy.' All signs of radical dissent were to be suppressed least France come to England. Making no concessions to post-war conditions, the Corn Laws were introduced, benefiting agriculture but making food more expense for the labouring poor and costs more expensive for the rising middle-class manufacturers.

There was almost nothing these people could do by way of legitimate protest because Parliament was totally unrepresentative. Urban centres like Manchester, with close on a million people, were hugely underrepresented, while the so-called 'rotten boroughs' amplified the powers of the landlord. Old Sarum in Wiltshire, one particularly notorious example, sent two members to Parliament, elected by a single voter. Something clearly had to change, which is precisely why thousands of people gathered at St Peter's fields to hear Orator Hunt demand Parliamentary reform.

As I have already said, there is no clear pattern to what follows: it wasn't a deliberate act of murderous oppression; it was a bloody mess in the usual English fashion, a piece of administrative incompetence praised after the event as firm action to restore order. The government feared revolution so ordered the local magistrates to take whatever measures they judged necessary. The local magistrates, overwhelmed by the crowds, and uncertain what to do, called on the assistance of the military, including that of the Manchester and Salford Yeomanry, swaggering part-time soldiers, made up mostly of shopkeepers and publicans. Why publicans I have absolutely no idea. The Yeomanry were also said to be drunk that day, though this is a contention now beyond all objective proof.

The order was given to arrest Hunt and the other speakers, a task beyond the local law enforcement agencies in view if the massive crowd-estimated at up to 80,000strong-surrounding the speakers. The soldiers advanced, including the Yeomanry. Caught in the press of the mob, they panicked-it's as simple as that-cutting in all directions with their sabres. This continued even after the crowd tried to disperse, caught in a terrible bottle-neck. Some of the professional soldiers present were shocked by the actions of the Yeomanry, with one officer of the 15th Hussars calling on them to stop. But panicked soldiers, especially pseudo-soldiers like the Yeomanry, are often beyond reason.

That's it; that's all it as: a stupid, incompetent and tragic mess. The government, however, immediately congratulated the magistrates for their 'firm action' while continuing on a centralised policy of political repression, the centre piece of which was the Six Acts. It worked, up to a point. But this was England; things don't happen suddenly: they happen by slow degrees, like the advance of a glacier. In the end the system simply gave way under the pressure for reform, increasing Parliamentary representation by the Act of 1832, allowing the presence of elements of the upper bourgeoisie. Most of those present that day at St Peter's Fields were simply left behind, waiting for another hundred years to be able to chose the counsels of the nation.

Now an important part of left-wing martyrology the Peterloo Massacre had very little long-term political significance. Change came not because of it but in spite of it. Indeed, the only lasting memorial was the foundation of The Guardian newspaper, set up by a group of radical journalists outraged by Manchester's Tiananmen Square.
Posted by Anastasia F-B at 16:21