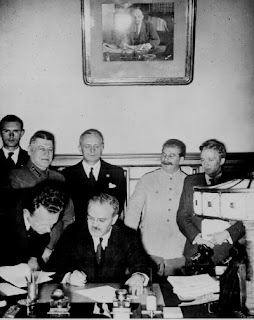 Hold on; I’m going to try to step out of my skin and try something unusual-I’m going to try to defend the historical necessity, from a Russian point of view, of the Molotov-Ribbentrop Pact of August, 1939. But how can one defend such a devil’s bargain, an agreement that presaged the Second World War and the enslavement of millions of people; how can one possibly see any necessity in it at all? Well, now, let’s have a look.

First, I think it’s important to stress that Stalin was seriously unsettled by the advent of Hitler and the subsequent destruction of the German Communist Party, the strongest in Europe outside Russia. Not only did it highlight the serious errors of the so-called ‘Third Period’ strategy, in which communist parties were instructed to see democratic socialists as the main enemy rather than the fascists, but it seriously weakened Soviet security. Russia now faced a major threat on its western border, emphasised still further, I might add, by the 1934 Nazi non-aggression pact with the anti-Soviet Pilsudski regime in Poland. By degrees the Soviets moved towards a new policy, one based upon co-operation with so-called ‘progressive parties’, socialist and liberal democratic. Now we enter the period of the Popular Front.

Hand-in-hand with this new political strategy the Soviets sought a rapprochement with western governments. Maxim Litvinov, Commissar for Foreign Affairs between 1030 and 1939, worked towards closer co-operation with the democratic powers, placing an ever greater emphasis on notions of collective security. As part of this new approach Russia joined the League of Nations in 1934 and subsequently concluded bilateral alliances with France and Czechoslovakia. In the League itself the Soviets were at the forefront in demanding action against aggressive imperialism, a particular danger to them after the Japanese occupation of Manchuria. But against the rise of militant fascism and imperialism the League did virtually nothing. Indeed, after the outbreak of the Franco rebellion in Spain in 1936 only Russia took steps to defend the Republic and its Popular Front government.

One has to consider, moreover, how the Russians saw the rise of appeasement, which reached its apotheosis in the Munich Conference in 1938, to which they were not even invited, despite being an ally of the Czechs. A new fear entered Stalin’s mind: that Russia was to be abandoned in a possible war with Germany. It was from this point, as a direct result of appeasement, that a new cynicism entered Soviet foreign policy, emphasised by the replacement of Litvinov with Vycheslav Molotov.

Even so, almost up to the last minute, the Soviets were prepared to reach an understanding with England and France for the preservation of the peace. But the government of Neville Chamberlain, though increasingly hostile to the boundless ambitions of the Hitler regime, was in no particular hurry to enter into an alliance with Stalin. A diplomatic mission was sent to Russia, yes, but it came by sea, the slowest route possible, as Ribbentrop was flying to Moscow. The Poles, moreover, though now under direct threat from Germany, were not at all keen to see Soviet troops cross their border, even as allies.

We know retrospectively that Britain and France, while declaring war on Germany after the invasion of Poland in September 1939, effectively sat back for months, dong nothing at all to aid their Polish ally. Indeed, is it beyond possibility that they would also have sat back if Hitler had gone directly to war with Russia? True or not, Stalin thought that the west would have been content to see Russia, and communism, destroyed in such a conflict.

So, then, if security was the issue, if isolation was the issue, how was Russia to overcome these difficulties but by means of an understanding with Hitler? If Russia was less than ready for the forms of war introduced into history by the Germans in 1941 it was far less ready in the autumn of 1939, a time when it had not yet recovered from the purge of the officer corps and not yet learned the lessons of the Winter War with Finland.

The Pact, for all of its evil, and I do consider it evil in a moral sense, if serving the ends of realpolitik, gave Russia more space in the west, a territorial buffer zone, which eventually served to absorb the early impact of the 1941 onslaught. Without the territory taken from the Poles, which was seized by them in an aggressive war of conquest in 1919-1920, one has to remember, without control of the Baltic States, Leningrad would certainly have fallen within days of the invasion and Moscow surely not long after. With these major population and transport centres gone it’s difficult to see how Russia could have survived. And with Russia gone German domination of Continental Europe would have been complete. Yes, the Pact was bad, it was brutal and it was ugly. But it served its purpose. 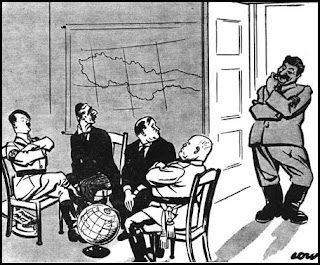 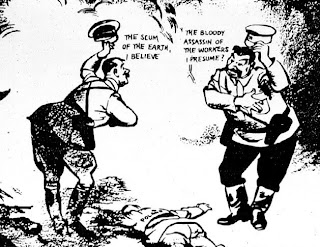 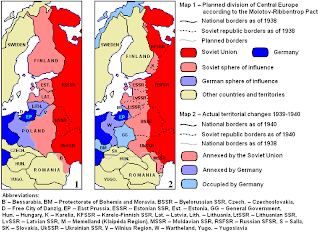