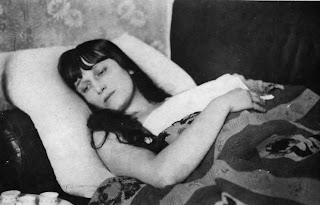 I’m continuing to read Robert Conquest’s engrossing The Great Terror, an exhaustive account of Stalin’s purges of the 1930s. It’s full of all sorts of tragic detail, about the death of hope and, in relation to the arts, what he calls the ‘holocaust of the spirit.’ I’ve long admired Anna Akhmatova, arguably the greatest Russian poet of the twentieth century, and that is really a singular accolade in a nation of great poets. She gave a voice to silence, if I can put it like that, to a time of silence. I can’t explain in words how much Requiem moves me. Just cast your eye over the words.

Not under foreign skies protection
Or saving wings of alien birth –
I was then there – with whole my nation –
There, where my nation, alas! was.


INSTEAD OF A PREFACE

In the awful days of the Yezhovschina I passed seventeen months in the outer waiting line of the prison visitors in Leningrad. Once, somebody ‘identified’ me there. Then a woman, standing behind me in the line, which, of course, never heard my name, waked up from the torpor, typical for us all there, and asked me, whispering into my ear (all spoke only in a whisper there):
“And can you describe this?”
And I answered:
“Yes, I can.”
Then the weak similarity of a smile glided over that, what had once been her face.

The high crags decline before this woe,
The great river does not flow ahead,
But they’re strong – the locks of a jail, stone,
And behind them – the cells, dark and low,
And the deadly pine is spread.
For some one, somewhere, a fresh wind blows,
For some one, somewhere, wakes up a dawn –
We don’t know, we’re the same here always,
We just hear the key’s squalls, morose,
And the sentry’s heavy step alone;
Got up early, as for Mass by Easter,
Walked the empty capital along
To create the half-dead peoples’ throng.
The sun downed, the Neva got mister,
But our hope sang afar its song.
There’s a sentence… In a trice tears flow…
Now separated, cut from us,
As if they’d pulled out her heart and thrown
Or pushed down her on a street stone –
But she goes… Reels… Alone at once.
Where are now friends unwilling those,
Those friends of my two years, brute?
What they see in the Siberian snows,
In a circle of the moon, exposed?
To them I send my farewell salute.

In this time, just a dead could half-manage
A weak smile – with the peaceful state glad.
And, like some heavy, needless appendage,
Mid its prisons swung gray Leningrad.
And, when mad from the tortures’ succession,
Marched the army of those, who’d been doomed,
Sang the engines the last separation
With their whistles through smoking gloom,
And the deathly stars hanged our heads over
And our Russia writhed under the boots –
With the blood of the guiltless full-covered –
And the wheels on Black Maries’ black routes.

You were taken away at dawn’s mildness.
I convoyed you, as my dead-born child,
Children cried in the room’s half-grey darkness,
And the lamp by the icon lost light.
On your lips dwells the icon kiss’s cold
On your brow – the cold sweet … Don’t forget!
Like a wife of the rebel of old
On the Red Square, I’ll wail without end.

The quiet Don bears quiet flood,
The crescent enters in a hut.

He enters with a cap on head,
He sees a woman like a shade.

No, ‘tis not I, ‘tis someone’s in a suffer –
I was ne’er able to endure such pain.
Let all, that was, be with a black cloth muffled,
And let the lanterns be got out ... and reign
just Night.

You should have seen, girl with some mocking manner,
Of all your friends the most beloved pet,
The whole Tsar Village’s a sinner, gayest ever –
What should be later to your years sent.
How, with a parcel, by The Crosses, here,
You stand in line with the ‘Three Hundredth’ brand
And, with your hot from bitterness a tear,
Burn through the ice of the New Year, dread.
The prison’s poplar’s bowing with its brow,
No sound’s heard – But how many, there,
The guiltless ones are loosing their lives now…

I’ve cried for seventeen long months,
I’ve called you for your home,
I fell at hangmen’ feet – not once,
My womb and hell you’re from.
All has been mixed up for all times,
And now I can’t define
Who is a beast or man, at last,
And when they’ll kill my son.
There’re left just flowers under dust,
The censer’s squall, the traces, cast
Into the empty mar…
And looks strait into my red eyes
And threads with death, that’s coming fast,
The immense blazing star.

The light weeks fly faster here,
What has happened I don’t know,
How, into your prison, stone,
Did white nights look, my son, dear?
How do they stare at you, else,
With their hot eye of a falcon,
Speak of the high cross, you hang on,
Of the slow coming death?

The word, like a heavy stone,
Fell on my still living breast.
I was ready. I didn’t moan.
I will try to do my best.

I have much to do my own:
To forget this endless pain,
Force this soul to be stone,
Force this flesh to live again.

Just if not … The rustle of summer
Feasts behind my window sell.
Long before I’ve seen in slumber
This clear day and empty cell.

You’ll come in any case – why not right now, therefore?
I wait for you – my strain is highest.
I have doused the light and left opened the door
For you, so simple and so wondrous.
Please, just take any sight, which you prefer to have:
Thrust in – in the gun shells’ disguises,
Or crawl in with a knife, as an experienced knave,
Or poison me with smoking typhus,
Or quote the fairy tale, grown in the mind of yours
And known to each man to sickness,
In which I’d see, at last, the blue of the hats’ tops,
And the house-manager, ‘still fearless’.
It’s all the same to me. The cold Yenisei lies
In the dense mist, the Northern Star – in brightness,
And a blue shine of the beloved eyes
Is covered by the last fear-darkness.

Already madness, with its wing,
Covers a half of my heart, restless,
Gives me the flaming wine to drink
And draws into the vale of blackness.

I understand that just to it
My victory has to be given,
Hearing the ravings of my fit,
Now fitting to the stranger’s living.

And nothing of my own past
It’ll let me take with self from here
(No matter in what pleas I thrust
Or how often they appear):

Not awful eyes of my dear son –
The endless suffering and patience –
Not that black day when thunder gunned,
Not that jail’s hour of visitation,

Not that sweet coolness of his hands,
Not that lime’s shade in agitation,
Not that light sound from distant lands –
Words of the final consolations.

CRUCIFIXION
Don’t weep for me, Mother,
seeing me in a grave.

The angels’ choir sang fame for the great hour,
And skies were melted in the fire’s rave.
He said to God, “Why did you left me, Father?”
And to his Mother, “Don’t weep o’er my grave…”

Magdalena writhed and sobbed in torments,
The best pupil turned into a stone,
But none dared – even for a moment –
To sight Mother, silent and alone.

I’ve known how, at once, shrink back the faces,
How fear peeps up from under the eyelids,
How suffering creates the scriptural pages
On the pale cheeks its cruel reigning midst,
How the shining raven or fair ringlet
At once is covered by the silver dust,
And a smile slackens on the lips, obedient,
And deathly fear in the dry snicker rustles.
And not just for myself I pray to Lord,
But for them all, who stood in that line, hardest,
In a summer heat and in a winter cold,
Under the wall, so red and so sightless.

Again a memorial hour is near,
I can now see you and feel you and hear:

And her, who’d been led to the air in a fit,
And her – who no more touches earth with her feet.

And her – having tossed with her beautiful head –
She says, “I come here as to my homestead.”

I wish all of them with their names to be called;
But how can I do that? I have not the roll.

The wide common cover I’ve wov’n for their lot –
>From many a word, that from them I have caught.

Those words I’ll remember as long as I live,
I’d not forget them in a new awe or grief.

Let them pray for me, like for them I had prayed,
Before my remembrance day, quiet and sad.

And if once, whenever in my native land,
They’d think of the raising up my monument,

I give my permission for such good a feast,
But with one condition – they have to place it

Not near the sea, where I once have been born –
All my warm connections with it had been torn,

Not in the tsar’s garden near that tree-stump, blessed,
Where I am looked for by the doleful shade,

But here, where three hundred long hours I stood for
And where was not opened for me the hard door.

Since e’en in the blessed death, I shouldn’t forget
The deafening roar of Black Maries’ black band,

I shouldn’t forget how flapped that hateful door,
And wailed the old woman, like beast, it before.

And let from the bronze and unmoving eyelids,
Like some melting snow flow down the tears,

And let a jail dove coo in somewhat afar
And let the mute ships sail along the Neva.
Posted by Anastasia F-B at 16:36