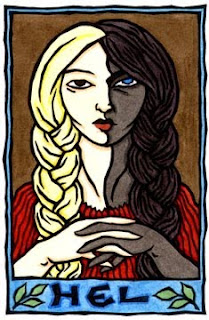 If I were to ask you to conjure up an image of Hell, of the Underworld, I’m reasonably certain that flames and heat would feature as the most significant features. Not for the Vikings, though; their vision of Hades was of a bleak, dank, foggy and misty realm. It was not a place of punishment-a concept imported by the Christians-merely the realm of the dead, presided over by Hella or Hel, who was eventually to give her name to the Christian realm of the damned.

In Scandinavian mythology Hella was the daughter of Loki and the great witch Angerboda, who lived in the Iron Wood. It was there that Hella and her brothers, a wolf and a snake, were raised. Prophecy had it that she and her siblings would eventually lead the Host of Destruction against the ruling Aesir pantheon. It was because of this that Odin, the chief God of the Aesir, had them brought to Asgard with the intention of neutralising a dangerous threat. There he personally took hold of Hella, clearly the most dangerous of the three, and threw her as far as he could. She was to land in the Realm of the Dead, becoming its Queen.

So, Helhaim was her particular dominion, the place where she received the souls of the dead, all of the dead, no matter if good or bad. Inheriting the witch powers of her mother, she is conceived riding on a black mare followed by a pack of dogs, the original Hell Hounds, and accompanied by two servants, the male Delay and the female Slowness.

Her realm resembles the Greek Hades in its neutrality as she resembles Persephone. Like the latter Hella is both of the underworld and beyond it: she is half-dead and half-alive. The upper part of her body is thart of a fair and beautiful woman, while the lower half is necrotised flesh, hence her sacred colours of black and white.

Although she was demoted by the Christians, who put Satan in her place, she remained active in popular consciousness as the feared witch or angel of death. In the fourteenth century when the Black Death came to Scandinavia, where it was to have a particularly devastating impact, it was believed that Hella travelled across the land armed with a rake and a broom. Villages wiped out by the contagion were said to have been swept; those where some survived were simply raked.

Hella lives on as the pale, red-headed vampire-witch in the pages of The Master and Margarita, Michael Bulgakov’s novel and great literary masterpiece. Witches, you see, great witches, never die. :-) 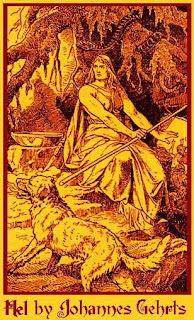 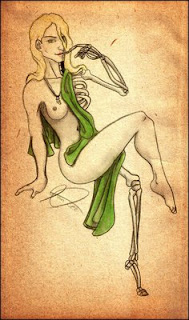