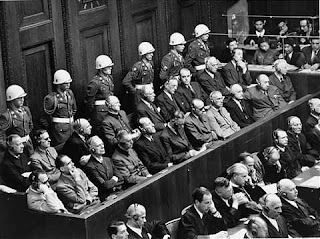 The trial of the major Nazi war criminals at Nürnberg is a subject over which I have always had mixed feelings: was it justice or was it vengeance; in the circumstances of the time was there any alternative to vengeance? My sense of unease has been amplified somewhat on reading After the Reich: From the Liberation of Vienna to the Berlin Airlift by Giles MacDonogh.

War crimes did not end with the fall of the Nazis. It's not just the usual stuff over which most of us have some awareness, like the mass rape of German women of all ages, but the dreadful crimes inflicted, for instance, on the Sudeten Germans by the Czechs, quite as appalling, in many cases, as those on the Nürnberg indictment. Some of men at Nürnberg were acquitted, yes, but they should never have been there in the first place. Hans Fritzsche was merely a substitue for Josef Goebbels, and where was the justice in that? Alfred Jodl was executed, though any of the Allied commanding officers could have been hanged for similar crimes. And even Julius Streicher, a hateful man of low intelligence, was essentially executed for 'crimes of expression'. The suave and persuasive Albert Speer was sentenced to twenty years imprisonment, whereas Fritz Sauckel was hanged, even though he only serviced the apparatus created by Speer, to whom he was subordinate. Speer's 'confession', properly considered, was never more than a series of abstractions and generalisations; he was never to admit his personal guilt. Rudolf Hess was considered mentally unfit to stand trial by the British, though he was brought to Nürnberg to allay Soviet suspicions that he was being deliberately withheld. He was not even in office when most of the crimes were committed, though that did not stop him serving out his natural life in prison.

Consider also the hypocrisy of the whole process. The bombing of civilian targets was dropped from the indictment in June 1945, because the Allies, particularly the British and Americans, were far more culpable than the Germans. Consider also the 'crime of waging aggressive war.' Well, the Soviets had attacked both Poland and Finland in 1939, the first in partnership with the Germans. Any German defence should, therefore, have allowed full discussion of the Nazi-Soviet Pact, but this was specifically forbidden. Russian prosecutors, moreover, were instructed to shout down any attempts by the accused to question the moral credentials of Stalin's dictatorship.

Yet I suppose in the end the trials, imperfect as they were, had a cathartic purpose, more than anything else. The crimes were so awful that something had to be done, and seen to be done. It was Herman Göring who said in October 1945 that "the victors will always be the judge and the vanquished the accused." A year later, though, he admitted that the process had served a wider purpose. Shortly before the verdicts were delivered he told the prison psychiatrist that once the German people learnt all that had been revealed at the trials they would lose all sympathy for Hitler, "He has condemned himself." In the end that is probably the chief justification for an imperfect process.
Posted by Anastasia F-B at 15:58