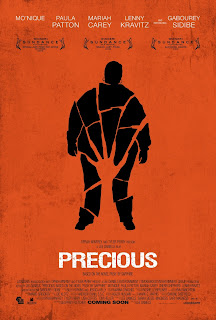 Precious is the kind of movie that leaves one almost lost in finding the right kind of words. Directed by Lee Daniels and based on a novel by Sapphire, a writer and performance poet, it tells the story of Claireece ‘Precious’ Jones, an obese New York teenager, played by Gabourney Sidibe, living in a home where the curtains are always drawn and the TV always playing; a kind of hell where she is subject to repeated sexual, physical and mental abuse at the hands of her father and her mother. Twice impregnated by her father, she is forced to leave school on the second occasion.

Through this misery Precious creates an alternate reality for herself, a dream world where she matters, where she is cared for, where she is the centre of attention, the only escape available. Precious finally leaves her awful home and bit by bit manages to recover her life, discovering her inner worth for the first time in attending an alternate school, where she learns to read and write properly, where she learns to give shape to her thoughts, give shape to herself. Precious is a raw, uncompromising and honest movie, altogether quite moving.

Sidibe was good in the title role, though I have to say that I found some of her dialogue difficult to follow at points. Mo’Nique was superb as Mary Lee Johnston, the abusive mother, and there were some very good supporting roles from Paula Patton as Miss Blu Rain, the teacher who helps Precious to read as well as find a home, and from Mariah Carey, who plays Miss Weiss, a social worker.