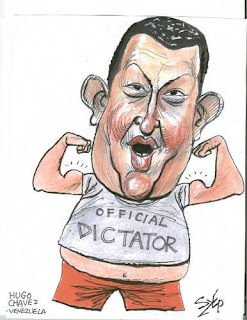 I managed to catch that tub-thumping clot Hugo Chávez doing his bit in Copenhagen, looking every bit like the cheap gangster he so clearly is. He continues to ‘do his bit’ in Venezuela, his fiefdom, looking for scapegoats to explain away the miserable failure of his socialist tyranny, to explain away the fact that this oil-rich country is plagued by power cuts and water shortages.

There is a Chávez-style solution for the latter. Venezuelans have been told to stop singing in the shower, thus cutting down the time spent there. Meanwhile, El Comandante will fly with Cuban scientists, zapping clouds to make them rain. You think I’m joking? No, I’m not! He’s also warned Venezuelans to watch out for fat people, seemingly another cause of the country’s woes. The latter I take to be an indication that resources are being unequally distributed, the fatties getting more, a fair assumption when one looks at the presidential torso.

He’s a joke; his government is a joke, though some of his attempted scapegoating carries potentially serious consequences, including his admonition for the country to prepare for war with neighbouring Colombia. But the woes of Venezuela have nothing do with showering divas, fatties or Columbians and everything to do with the promotion of ‘Chavistas’ to important posts for which they are totally unfitted. Rubbish rots in the streets and inflation is now well into double figures. The inefficient command economy has encouraged a vibrant black market in a country that already has a horrific crime rate, with Caracas being one of the most violent cities on earth.

It’s the usual story with socialists and socialism everywhere, the usual story of geese and golden eggs, creating poverty where once was riches. To do this in a place like Venezuela really is some achievement. I suspect that Chávez would even turn El Dorado into the land of dust. Not much to sing in the shower about. :-))
Posted by Anastasia F-B at 16:35