Imps are little devils, an expression that means something quite different now than it did in the past. For, you see, little devils were literally little devils!

Traditionally imps were small; demons who served witches as familiars. They were able to fly through the air and, invisible to all, spread mayhem and destruction along the way. In those parts of Europe where witchcraft was closely associated with devil worship the belief was that a new witch, in attending her first sabbat, was personally given an imp by Satan himself. The imp was not so much a servant as a master, ensuring that the witch carried out her quota of wicked deeds.

Imps were also little vampires that had to be nourished with blood. The host was obliged to feed them, milk if they were mothers, blood if they were not. It was supposed that the witch grew an extra nipple specifically for her imp, located anywhere on the body. The search for this added nipple became one of the features of the witch-trials.

If the witch herself was unable to supply sufficient fluid the imp would set off on its own hunt, preying on local livestock, sucking them completely dry. On these hunts they would travel in the shape of familiar animals, bats, ferrets, hedgehogs or cats. Hence the continuing superstition that certain animals are harmful to cattle. Hedgehogs are still believed to steal cow’s milk, as are bats.

The image of the imp is most probably rooted in older folk beliefs, that of the shape-shifting spirits, not malevolent but friendly and helpful. In pagan Europe households as far apart as Lithuania and Italy once cherished snake spirits as household helpers. In Finland the Para were domestic spirits who assumed the shape of cats, frogs or snakes. In later folklore the Para were transmuted into goblins, magical and beneficial creatures.

As the horror of the witch trials, and the fear and ignorance that motivated them, slipped into the past the imp re-emerged in her original form, a figure of fun, mischief and humour, though sometimes with an acidy and sardonic edge. They entered popular imagination in Victorian times in Halloween postcards, shown not as animals but as red devils. One can find this kind of imp, fun-loving, lascivious and joyful, drawn to perfection The Halloween Tarot by Kipling West. 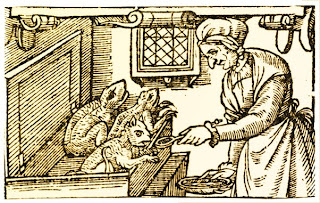 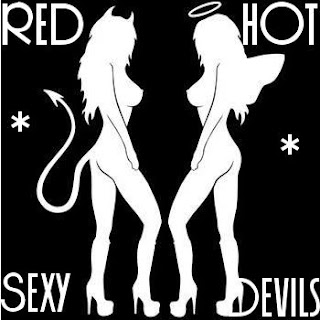 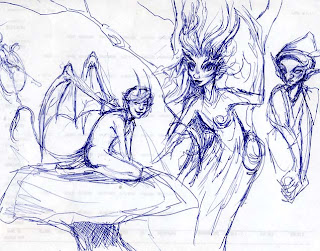 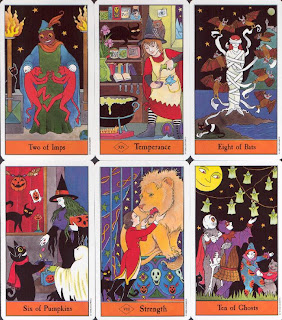