Terror, nothing but Terror 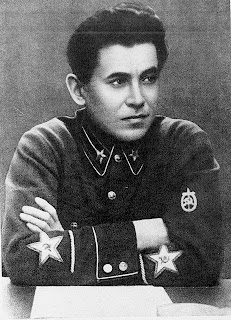 Amongst my other reading at present I’ve been working my way through Robert Conquest’s classic The Great Terror, an exploration of the Stalinist purge in Russia in the mid-1930s. I’ve reached the most terrible phase of that terrible part of the nation’s history, the so-called Yezhovchina, named after Nikolai Yezhov, then head of the NKVD, the Soviet security police.

Here’s one story that caught my attention, a demonstration of the manic stupidity of the whole period, the kind of thing that emerged in the process of lunatic denunciations. It concerns one Sylakov, a deserter from the Red Army. He gave himself up in Kiev claiming that, for whatever reason, that he had been involved in an anti-Soviet plot. He told of a planned raid on a post office in which he had a leading part, intended to provide funds for a terrorist cell. This was not enough for the NKVD, so after a good kicking, he implicated the whole of his old military unit, right up to the commanding officer. The attacks planned were not now on a post office, no, but on government leaders.

Following this almost the whole of his unit was arrested, from the commanding officer right down to the drivers, wives included. Sylakov’s family were also drawn in, his two sisters, his father and his old and crippled mother. So, too, was an uncle, who had only ever met his nephew once. The said uncle was discovered to have served once as a corporal in the old Imperial Army, and was immediately promoted by the NKVD into a Tsarist general!

As with a rock thrown into a silent pool, the rings grew ever wider as this absurd tale progressed, embracing more and more, to the point that every cell in Kiev prison was occupied by someone implicated in the ‘Sylakov Plot.’ But no sooner had the intensity of the Terror slackened with the fall of Yezhov in late 1938 than the NKVD began to re-examine the whole case, now a complete embarrassment. The suspects were all interrogated again, with a view to getting them to withdraw their forced confessions. Some, fearing a trick, refused and had to be given another kicking, to get them to reject statements that carried the death sentence! Is there any greater madness than this?
Posted by Anastasia F-B at 16:58