A Life of Storms 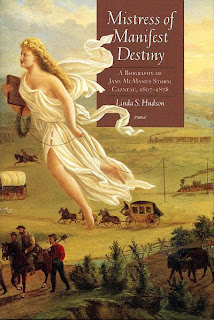 Storms Cazneau, an altogether remarkable woman, was born Jane Maria Eliza McManus After her marriage to Allen Storm took to signing herself simply as 'Storms'. A second marriage was to add the Cazneau to her wonderful array of names.

Growing up in Troy, New York State, she attended the local female academy, one of the earliest colleges for women. In 1832 she and her brother Robert moved to Texas, then still part of Mexico, and became involved in land speculation. When this failed she turned to journalism, working first for Horace Greeley, editor of The New Yorker. Later she wrote for a number of other papers, including the New York Sun and the Democratic Review, both strong advocates of manifest destiny.

Storms embraced this with enthusiasm, and was to go on to be a firm believer, northerner though she was, in the expansion of the South, and of slavery, its 'peculiar institution', into Central America and the Caribbean. In the Sun she filed stories during the Mexican-American War advocating the annexation of all of Mexico. She went the front, where she witnessed Zachary Taylor's capture of the fortress of Vera Cruz in March 1847, the first female war correspondent in American history.

At the end of the Mexican war she turned her attention to Cuba, and the potential it represented, advocating its annexation, and denouncing its Spanish colonial overlords. She later settled at Eagle Pass, a frontier village three hundred miles up the Rio Grande from the Gulf of Mexico, getting to know many of the local Indian chiefs. With her second husband she moved to the Dominican Republic in 1855, where she was to remain for most of what was left of her life. Despite her earlier sympathies for southern expansionism she disapproved of secession, and was hired by William H. Seward, Lincoln's Secretary of State, to write denunciations of the Confederacy. It was a matter of simple principle for Storms: the war was a serious interruption to further prospects of American expansion in the Caribbean. She had lived a life of storms, and it seems only fitting that she met death in the same fashion. In 1878 she was drowned on her way to Santo Domingo, after the steamer on which she was travelling was caught in a huge storm
Posted by Anastasia F-B at 16:11