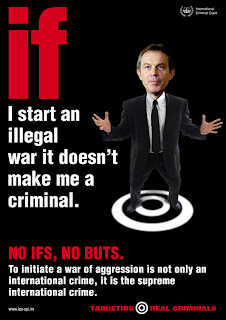 I was wrong about the Chilcot Inquiry into the causes of the Iraq War, at least in part. I said it would add nothing new to our understanding of the Iraq war, an ill-conceived adventure that cost so many lives. But it has; it has added to our understanding of Tony Blair, of the motives, of the character and of the attitude of this morally debased man before he has even had a chance to appear.

We now know, by his own admission, that Weapons of Mass Destruction were not vital to the war; it was merely a ‘technique’ used to persuade Parliament and the nation beyond that the invasion of a sovereign state was justified. We now know that he would have invaded Iraq anyway, though he would have used a different set of arguments, a different technique of mass deception.

Last month I wrote a blog on Chilcot, headed Just another Toothless Dog, in which I said;

In order to get support for the invasion Blair lied to both the Parliament and the nation beyond. Forms of news management and propaganda were introduced by Alistair Campbell, his thuggish aid, which would have shamed even Doctor Goebbels. There was absolutely no threat at all to our national security from Iraq and Blair knew there was no threat; this was not an exercise in self-deception. Lying was used as a deliberate and sustained political strategy, possibly for the first time ever in our history, at least on such a scale. Parliament wasn’t just ‘mislead’; Parliament was manipulated and deliberately deceived

Well, I honestly never expected that we would receive an open admission of these simple truths. I try to be as objective as I can in these matters, but I cannot think of this man other than with the deepest contempt; contempt for his cowardice, his hypocrisy and his utter lack of moral backbone. He now recognises that the WMD argument no longer holds so he shifts ground, presumably in anticipation of his appearance before Chilcot in the New Year.

I can see it now, the final flowering of the hints he has laid down ever since the Labour Party conference the year after the invasion; that ridding the world of Saddam was the ‘moral’ thing to do, the right thing to do, the thing that harmonised most with his ‘Christian conscience.’ There will be no mention, of course, of the huge death toll that followed in wake of this ‘moral’ decision.

Oh, make no mistake: I think the world is a better place without Saddam Hussein, just as I think it would be a better place without Mahmoud Ahmadinejad, Kim Jong-il, Robert Mugabe, Hugo Chávez, Fidel Castro and Colonel Gaddafi, all repellant dictators. But by what right do we remove one piece on the board only to retain the others? More specifically, what gave Blair the right to remove Saddam, who at no point represented a threat to the security of this country, only to do deals with Gaddafi, who did represent such a threat? We remove Saddam only to shake hands with the butcher of Lockerbie. It makes no sense other than in terms of the most depraved forms of realpolitik imaginable.

I sometimes wish that I did believe in God, in a final court of divine retribution, because Blair has so much to answer for, so many souls demanding justice.
Posted by Anastasia F-B at 16:59