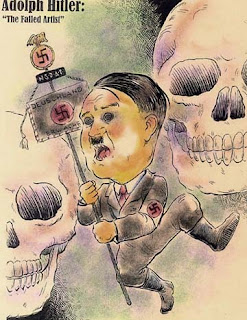 As the truly absurd contention that Hitler was 'democratically' elected tends to appear from time to time the point really needs to be clarified.

At its electoral peak the NSDAP obtained 37.4% of the popular vote in Germany. By November 1932, the last free election to the Reichstag, this had declined to 33.1%. So, even at their most popular the Nazis failed to impress 62.6% of the electorate, and they never achieved an overall majority in the Reichstag. Hitler was only appointed Chancellor by some shady political manoeuvring amongst the cabal surrounding President Hindenburg. More than that, he was appointed precisely because the NSDAP was showing signs of serious electoral decline. The fear shared by Franz von Papen and his reactionary clique, the real power brokers in January 1933, was that former Nazi voters would move en mass to the Communists, a fear given some support in the November elections, which saw the KPD gaining ground, just as the Nazis lost.

The early Hitler ministry, like every other since 1930, had no majority in the Reichstag, and was thus dependant on the continuing use of Artlcle 48 of the Weimar Constitution, which allowed the President to overrule parliament. So, please, please, no more 'Hitler was elected' rubbish. This is the sort of garbage one only ever hears from ignorant old dilettantes. :-))

Now to a broader question: was Hitler a weak dictator? This has been the subject of detailed scholarly debate, and is by no means easy to answer. Hitler's style of dictatorship was so different from, say, that of Stalin or Mussolini in a way that makes comparison all but impossible. For one thing he was personally lazy, a vice for which he had been criticised in the early days of the Nazi movement by Gottfried Feder. Other than the exercise of power for its own sake, the Nazi Party, moreover, had little in the way of an organised programme, more a series of vague goals.

It was also Hitler's practice to appoint people to office with overlapping areas of authority, which turned the Nazi State into a jungle of competing interest groups and personalities. Hitler intervened rarely to sort out the ensuing mess. All of this contributed to Hans Mommsen's contention that Hitler was "in many ways a weak dictator." From the opposite political perspective David Irving even suggests that Hitler was "probably the weakest leader Germany has known this century" (Hitler's War, 1977, introduction). This view conflicts with others, from Alan Bullock to Klaus Hildebrand, who says that Hitler had both a programme and the power to carry it out.

So, what did the people who knew him best think of the Führer and his working habits? You can have this from the Memoirs of Albert Speer, the man who, perhaps, knew him best of all;

I would often ask myself did he really work? Little was left of the day; he rose late in the morning and conducted one or two official conferences; but from the subsequent dinner on he more or less wasted his time until the early hours of the evening. His rare appointments in the late afternoon were imperilled by his passion for looking at building plans. The adjutants often asked me 'please don't show any plans today'.

This lack of a systematic approach to work was made even worse in February 1938, after which cabinet meetings were no longer held. Germany, in a very real sense, ceased to have an effective government machine, with decisions being taken in a manner that allowed civil servants to act. Quite often Hitler was incommunicado in his remote mountain chalet near Berchtesgaden, so that "Ministers in charge of departments might for months on end, and even for years, have no opportunity of speaking to Hitler...Ministerial skill consisted in making the most of a favourable hour or minute when Hitler made a decision, this often taking the form of a remark thrown out casually, which then went its way as an order of the Führer." (J. Noakes and G. Pridham (eds.), Nazism, 1919-1945, vol. 2, State Economy and Society, 1933-1939, 1984, p. 200)

The only argument here against the notion of a weak dictatorship is that this lack of system and structure somehow magnified Hitler's personal power; but it still reduced the effectiveness of the whole Nazi system. Charisma is a card that should never be overplayed. Decisions could and were made, sometimes quickly; but these tended to be in areas of immediate concern to the dictator, particularly over matters of foreign policy. However, on the Jewish question, a matter seemingly central to the whole Nazi programme, the policy was marked by muddle and confusion, until very late in the day. The very best that can be said of Hitler is that, if not weak, he was, as Ian Kershaw has argued, not "master of the Reich" in the sense of being all omnipotent.
Posted by Anastasia F-B at 22:57