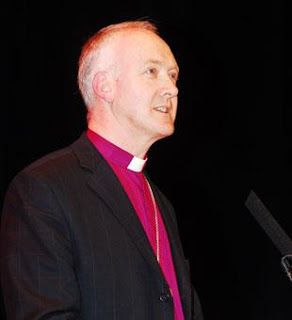 The Bishop of Croydon, the Right Reverend Nick Baines, is an intelligent and rational man. He’s had a good rational and intelligent look at some long cherished Christmas carols and concluded that they are nonsense; that they turn Jesus into a fantasy, into a Father Christmas figure, and that they are an embarrassment to sing. Just exactly who they embarrass beyond the Bishop I’m not quite sure, so I shall just have to take his word for this, the word of an intelligent and rational man.

In his recently published Why Wish You a Merry Christmas, the dear bishop sets his canon against jolly old tunes like Away in a Manger, O Come, All ye Faithful, and Once in Royal David’s City, which, he declares, are dripping with Victorian sentimentality. After all, he drones on, what adult could sing of a baby that ‘no crying he makes’ without embarrassment? Jesus would be abnormal if he had not cried as a baby:

If we sing nonsense, is it any surprise that children grow into adults and throw out the tearless baby Jesus with Father Christmas and other fantasy figures.

Forgive me; I’m about to change gear; I’ve had enough of the dripping irony. These songs, these carols, are part of a tradition. They have lasted so long, well after their Victorian use by date, because people enjoy them, because they are fun to sing and embarrass not a soul, I would hazard, beyond this ridiculous, silly man.

I don’t believe in God and no longer consider myself to be a Christian. Still, I grew up in the Church of England and still retain some affection for it, for its traditions and its dottiness. It is part of England; it’s part of what made England; it’s part of our national identity. Oh, I so hate to see it so ill-served by the turbulent priests it has now, by woolly-minded Sharia Williams and carol-hating Crying Croydon, in all his ridiculous rationality.

After all, when one starts to ‘deconstruct’ religion, faith and belief, where does the process end? Religion, by its very nature, has to be based on magic and mystery, or it is based on nothing. Yes, if one happened to believe in the divinity of Christ, that he is God incarnate, then surely that would also embrace the possibility that he was a quiet, tearless baby! The baby goes, the manger goes, the three wise men (pagan, incidentally) also go, along with just about ever supernatural aspect of the testaments, Old and New, that one can think of. God is absolute: how can he have a Son? Oh, so all of those animals really fitted in Noah’s Ark, the dinosaurs as well? And did all of humanity, all of it, really spring from two people? This is a door, once opened, will never be closed again. The bishop in all of his rationality and intelligence has not the native wit to recognise this simple truth.

Sing your hearts out and ignore this killjoy and literal-minded prelate, and let’s just hope in future that no more droning he makes. :-)
Posted by Anastasia F-B at 16:33