German Atrocities in the Great War 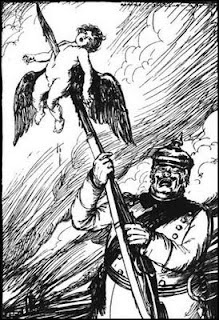 It is perfectly true that, throughout history, war and atrocity have walked hand in hand, though the Great War is possibly the first occasion in which the question of misbehaviour by one of the combatants became a significant political issue, an issue deeply tied up with the emergence of propaganda as a weapon, more effective, in its own way, than guns and bombs.

Indeed, the British might have been said to have been carried into the war on a wave of propaganda, centering on the rape of 'Gallant little Belgium.' As practitioners of the new art the they were far more adept than the Germans, and the weapons was to be used time and again to explain Prussian barbarism, from the execution of Edith Cavell and the sinking of the Lusitania. Whereas the early campaign had been for the consumption of a domestic audience, later activities were aimed at influencing public opinion in the United States. Many of the main accusations against the 'Huns' were summarised in The Bryce Report of 1915. As a political tactic the whole thing was quite masterly, later earning the respect of Adolf Hitler in Mein Kampf.

It was only after the war that the doubts began to set in; and, as the attitude towards Germany began to change in the inter-war period, many of the accusations were considered to be outright fabrications, including arguably the most infamous of all, the alleged crucifixion of a Canadian soldier by the name of Harry Band. In Britain a strong pacifist mood took shape in the 1920s, which argued that 'atrocity propaganda', as it was called, had been used to manipulate people into supporting the mass slaughter on the Western Front. A classic example of this is Falsehood in Warfare by Arthur Ponsonby, published in 1928. In Germany, a commission set up by the Reichstag to examine the issue, published a report in 1927, denying that any atrocities had ever taken place. And so the matter passed into popular consciousness, making it difficult to get people in the Allied nations to accept the truth of the stories that filtered through from occupied Europe during the Second World War.

So, was it all just fabrication, propaganda and lies? No, it was not, as the Germans tacitly admitted themselves in the White Book of 1915, which justified actions in Belgium against what was described as Francs-tireurs, alleged irregular forces. The simple fact is that Belgian resistance was tougher, and more prolonged, than the Germans had expected. The invading army became ever more anxious as it advanced, often attributing enemy fire to civilian irregulars. Because of this they began to take pre-emptive measures against an imaginary enemy. Civilians were shot on suspicion alone. The Kaiser himself justified the actions of his troops in a note to President Wilson of September 1914, "My generals were finally compelled to take the most drastic measures in order to punish the guilty and to frighten the blood-thirsty population from continuing their work of vile murder and horror." Over 6000 Belgian civilians were shot, sometimes in large groups by machine gun, in a brief ten-day period during the second half of August 1914. Whole villages were destroyed. In Louvain alone 248 people were killed by nervous German soldiers, convinced that they faced a civilian uprising.

On the basis of these very real incidents it became possible to weave stories of mass rape and mutliation; of murdered nuns and disfigured children. Allied propaganda, in other words, may have exaggerated, but it was not without substance; it was not a complete lie. Harry Band? Well, in 2002 Channel Four in England screened a documentary claiming that this story, long considered to be pure invention, was indeed based on a real incident. 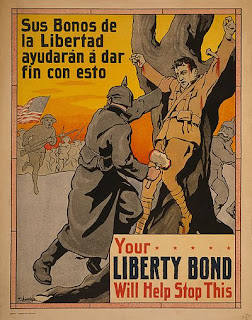 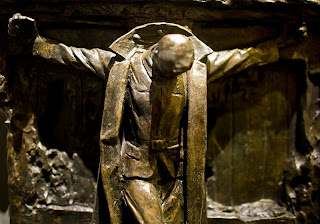